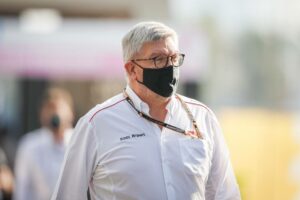 Ross Brawn and Pat Symonds are set to depart the roles they have with the Formula One Group at the end of 2022, according to a report.

Autosport say the news was contained in a document issued by F1 as an update on future developments within the organisation.

Brawn, 67, has been involved in the sport since 1978 when he joined Williams as an engineer and went on to win World Championships in senior positions with Benetton, Ferrari and his own self-named team which was then sold to Mercedes.

Since 2017, he has been the motorsports managing director for Formula One and among his recent innovations was the introduction of the sprint qualifying format during the 2021 season.

Autosport report “it is not yet clear whether he will retain an honorary or consultancy role with the F1 organisation, or who might replace him as managing director”.

Also said to be leaving is Symonds, his former Benetton colleague whom Brawn selected to head up the F1 technical department and to work on the future regulations that will come in next season having been delayed by a year due to the pandemic.

Symonds’ last big job appears to have been his involvement in the new power-unit regulations to be introduced in 2026, which have reportedly encouraged the Volkswagen Group to enter Formula 1.

It is also reported by Autosport that “in a parallel development, members of the F1 technical team that previously worked under Symonds are to be transferred to the FIA – a move that has in part been encouraged by an EU requirement to separate the rule-making process from the promotional organisation”.

Symonds had put together a team of around 15 engineers who had mainly worked at F1 teams in senior roles previously. They have been involved in research in various areas, from aerodynamics to new fuels, while the rules were being developed.

Most of the people on that team, including head of aerodynamics Jason Somerville, will therefore be employees of the FIA in future, working under the governing body’s head of single-seater matters, Nikolas Tombazis.

However, head of vehicle performance Craig Wilson, who has played an important role in helping to design new circuits as well as being involved with the car technical package, will remain at F1.