Romain Grosjean fights his own fire at Detroit Grand Prix 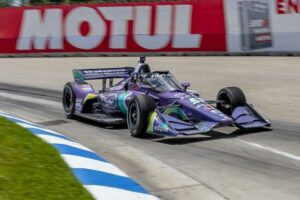 Romain Grosjean went from racer to firefighter just six months on from his horrific fireball crash at the Bahrain Grand Prix in 2020.

You may completely understand Grosjean wanting to stay away from fire given events back at the end of November but, during race two at the Detroit Grand Prix in IndyCar – where Grosjean now predominantly plies his trade – he ran back towards one.

Thankfully this was a much smaller blaze to deal with as the brakes on his Dale Coyne/Rick Ware failed and subsequently caught fire.

Grosjean hopped out of the car quickly, but rather than completely the leave the racetrack he ran to the marshals for a fire extinguisher and headed back to the fire to put it out.

A member of the safety team then moved Grosjean away from his car completely before he could properly use said extinguisher.

WOW. Romain Grosjean – the man who walked out of fire last year – just ran back to his car on fire this time to try and put it out.

It was the end of a pretty miserable return to IndyCar racing for Grosjean, who missed out on the Indianapolis 500 due to an agreement to skip the oval rounds.

He crashed out of the first race with five laps to spare and the reliability issue in the second race ensured he left Belle Isle with zero points to his name despite really encouraging displays in qualifying.

“It was a pretty eventful weekend in Detroit,” Grosjean said.

“I think we had two mega qualifying results with a third and fifth.

“[On Saturday] We struggled a bit more with the balance. But we were hanging in there at the restart following the red flag and we were looking good.

“I made an attacking move on Simon Pagenaud but sadly we touched, and it caused a puncture.

“After that, I was running at the back and I was trying to find some pace, but I was a bit optimistic, and I ended up in the wall..

On his Sunday race performance, he added: “I got sandwiched at the race start and I lost a fair bit of positions.

“Eventually we had a brake fire, and I had to extinguish a fire, but we’re all good here!

“I think the positive of the day is that we improved the car a lot from yesterday and we can now look forward to Road America.”