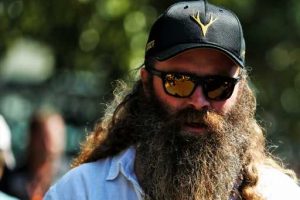 Rich Energy CEO William Storey has again claimed the brand is returning to F1 and says the goal is to add colour to a dreary paddock.

The energy drinks company joined the world of F1 in 2019 as a title sponsor for Haas, but it didn’t take long for things to go wrong.

After months of behind-the-scenes conflict and financial issues, the contract between the two parties was terminated in September that same year.

Storey, who became a controversial figure for his outspoken attitude, recently claimed in a tweet that the brand will be returning to the grid in 2021.

He has now doubled down on such claims, saying that it’s the next step in his and his company’s vindication.

“We are delighted to return,” he told FormulaSpy.

“We were valuable enough in 2019 for corporate investors to try & steal the brand & our major competitors to repeatedly take legal action.

“I said, from day 1, we would beat the competition & our return to F1 is the next step of me being vindicated. Many fans actually support us & we aim to add colour to a dreary corporate paddock.”

There has been much turmoil regarding the ownership and finances of the brand since it entered F1 in 2019, but Storey insists that there are no serious, genuine issues.

“Rich Energy is an international group trading in multiple countries,” he said.

“Corporate shareholders tried and failed to steal the brand & blew up the UK distribution company in the process. Commercially idiotic & hubristic. Unfortunately, Haas believed the nonsense of this group which they now regret.”

“Despite that attack, I have led a renaissance of the brand worldwide & our return to F1 is merely the next step of our growth.”