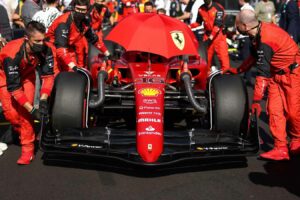 Ferrari have prepared an upgraded floor for the F1-75, but a report from Italy claims they will not fit it at the Emilia Romagna Grand Prix.

The early weather forecast for the weekend at Imola is a wet one, and the Italian edition of Motorsport.com reports that the Scuderia will opt against running their upgraded floor as a result of the less-than-favourable weather.

On top of that, the solitary hour of Friday practice comes as a result of the first sprint qualifying weekend of the season happening at Imola this weekend – with a changed format that sees standard qualifying move to Friday, the sprint on Saturday and the grand prix on Sunday.

Cars go into parc fermé when they leave the garage for qualifying, so the limited time to test their new part is said to have factored into their decision, as well as the report claiming “the indications that emerged from the simulator advised the Prancing Horse technicians to insist on the F1-75 which impressed so well in the first three races of the 2022 season.”

Ferrari aren't bringing many upgrades to the #ImolaGP, but their 'wide sweetspot' in car setup should help keep them at the front…

Watch or listen to Torquing Point in full via the link below:https://t.co/qoIK7RcHzm #F1 pic.twitter.com/z55hNztTyD

Ferrari are still due to make small adjustments to their car in the hope of reducing the effect of porpoising, and they predict that their field-leading car will still be able to compete at the front once again without their major upgrade.

The Scuderia are already due to introduce power unit upgrades at the next round in Miami, so if the new floor is unused this weekend, that will likely then be fitted in Florida in May.

Regardless of whether he finishes or not on Sunday, Charles Leclerc will maintain the lead of the Drivers’ Championship as he holds a healthy 34-point advantage over George Russell heading into the weekend.

Ferrari’s nearest rivals, Red Bull and Mercedes, claim to not be bringing “significant” upgrade packages with them to Imola, but others are likely to fit their first new developments of the season – with Alpine in particular also constructing an upgraded floor for the weekend.

The first visit to Italy this season is also due to take place in front of a sell-out crowd at Imola, with both Ferrari and AlphaTauri set to compete in front of home support.