Renault expands on value of Alonso test programme in 2018 car 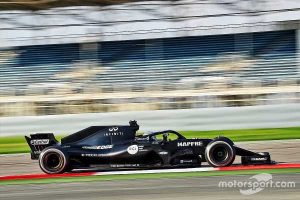 Renault believes there is great value in Fernando Alonso’s test programme in a 2018-spec car ahead of his Formula 1 comeback in 2021 after announcing further running plans.

Two-time world champion Alonso will return to F1 full time next year with Renault, having last raced in 2018 before quitting.

The Spaniard will continue his preparations with another two-day test in the 2018 car, taking place this weekend at the Yas Marina Circuit in Abu Dhabi.

Asked by Motorsport.com about the thinking behind Alonso’s test running, Renault F1 executive director Marcin Budkowski said it was a useful way for him to get back up to speed and re-adjust to F1 machinery.

“But he also hasn’t driven the car for two years. They are bloody fast cars. He needs to get back in shape, get back in the rhythm, so he’s taking any opportunity he can to drive.”

Budkowski added that it would help Renault fine tune minor things such as steering wheel placement or seat position, saving it time ahead of the reduced pre-season running for 2021.

“It’s an opportunity to drive and work with him on things like the steering wheel, his favourite button position, how he wants to be able to activate all the different systems in the car, and practice our procedures,” Budkowski said.

“It seems simple but the more we practice these things, the less we have to do in winter testing. We only have three days of running for our two drivers in winter testing next year, so practicing FIA procedures, all the various things he will need to have under his belt that might be different from what he experienced before, and also getting accustom to the team.

Since making his last F1 start with McLaren in 2018, Alonso has won the 24 Hours of Le Mans and the FIA World Endurance Championship with Toyota, as well as taking part in the Dakar Rally and the Indianapolis 500.

Alonso has signed a two-year deal for his third stint in F1 with Renault, having previously raced for the team in 2002-06 and 2008-09, and has his sights set on the shift in regulations for 2022 to return to the front of the order.

Budkowski hailed Alonso’s determination and curiosity in all of Renault’s F1 plans, revealing that he was willing to get a head start on development work for 2022 at the earliest opportunity.

“We were in the wind tunnel, and he said, ‘so you can’t run the ’22 car at the moment?'” Budkowski recalled.

“I said no, we can’t do it because of the regulations. He said, ‘when can you start developing?’ and I said 1 January.

“This is the level of motivation of Fernando at the moment.”