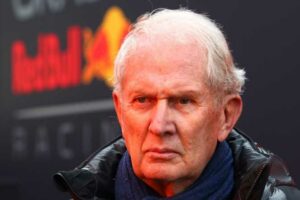 Red Bull’s Helmut Marko is far from pleased with the FIA after they issued a porpoising-related technical directive pre-Canadian GP.

Multiple teams and drivers were applying pressure on the FIA to act after a very uncomfortable Azerbaijan Grand Prix, the bouncing effect hampering many drivers and sparking fears over their long-term health.

The FIA would indeed respond, releasing a technical directive prior to the following round in Canada as the governing body looks to ensure that teams are running their cars in a safe setup.

Red Bull though has led the criticism of this technical directive, team principal Christian Horner arguing that it came in response to the struggles of one team, that being Mercedes, the Silver Arrows having been hampered by porpoising and bottoming for much of the early stages of the season.

Horner added that it was “very dangerous” for the FIA to be put in control of the setups which teams were using.

And Marko, Red Bull’s driver programme chief, echoed the view that this technical directive was in response to Mercedes’ troubles.

“I don’t think the FIA’s decisions are right,” Marko told Sky. “One team, Mercedes, has the biggest problems and then they react in the middle of the season.

“There is a simple solution: you just have to raise the car. Then you don’t have this bouncing anymore, but you lose speed. The fact that they are now reacting in this way and trying to impose such powers on the FIA, which practically determine the set-up of the cars, is a quick fix that has certainly not been thought through.”

The Canadian Grand Prix was used more for data gathering rather than the FIA putting their new porpoising measures into force.

But put to Marko that the FIA wishes to be monitoring this bouncing as of the upcoming British GP, he believes the directive was too vague for that to be done effectively, adding that currently Mercedes stand to be worst affected by it.

“There are still improvements to be made, because the parameters are far too vague,” said Marko of the directive.

“One would be exposing oneself to arbitrariness. That would mainly affect the team that complained about it.”

In Baku, Red Bull’s Sergio Perez joined the group of drivers speaking out against the bouncing, but Marko said Red Bull keep their drivers in “top” condition, so he sees it as being up to the individual teams to address the ride quality of their cars.

“Our drivers are one of the biggest assets we have,” said Marko. “We make sure that they are in top physical condition.”