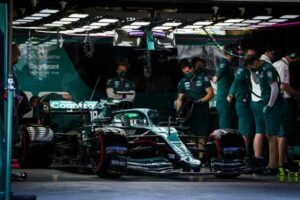 Although yet to nail down a start date for Dan Fallows, Aston Martin expect Red Bull’s aero chief to switch teams early in 2022.

This has not been the easiest of campaigns for Aston Martin upon the brand’s return to Formula 1, facilitated by Lawrence Stroll.

Following aerodynamic changes which appeared to hit Mercedes and Aston Martin most significantly, the latter find themselves P7 in the Constructors’ Championship with Alpine and AlphaTauri ahead and stretching further out of reach with four rounds to go.

But the long-term goal for Aston Martin is very much to rise to title contention in Formula 1 and so as part of that, a major recruitment drive has been taking place.

One of the biggest captures is that of Fallows, head of aerodynamics at Red Bull, who will become Aston Martin’s technical director.

The difficult part though had been confirming a start date, with Red Bull standing firm against a swift change of scenery for Fallows.

But Aston Martin team principal Otmar Szafnauer is hopeful Fallows will arrive during the first quarter of 2022.

“We are still negotiating on Dan’s start time or date. And once that’s known, we’ll let everyone know,” Szafnauer is quoted by Motorsport.com as saying.

“Our aim is to to get him to start ASAP and sometime in the first quarter of next year.

“So if it’s the start of next season, that’s in the first quarter of next year. So hopefully, in that timeframe, we’ll be able to have him start.”

Another Aston Martin recruit is Luca Furbatto, set to leave Alfa Romeo to become engineering director at the Silverstone-based outfit.

As for when Furbatto will start his job, Szafnauer stated his arrival is imminent.

“Luca will be with us within weeks,” Szafnauer confirmed.

“Yes, he was announced. But you know, just like everybody, they have their notice periods to work out. So within weeks, Luca will be free to start with us.”

Arguably the most high-profile name to be announced by Aston Martin though was that of Martin Whitmarsh, the former McLaren Racing CEO having become the new Aston Martin Group CEO.

Whitmarsh was with the team at the United States Grand Prix but at this stage, Szafnauer said the 63-year-old is very much still finding his footing.

“He’s still getting his feet under the table, so to speak, and learning who we are,” Szafnauer confirmed.

“There are 600 of us now. And he spent a lot of time in the last few weeks just getting to know all the senior members of the leadership team, having long meetings with them.

“Some of the people he knew from the time he was in F1. But I think most of us he didn’t really have a working relationship with, so he’s starting to get to know who we are.

“And he’s there to help us. Strategically, there’s a lot for us to do, including building a campus, hiring people, putting processes in place that, say, perhaps a small team wouldn’t have really needed but a big team will need. And he’s come from a big team.

“When he was at McLaren it was one of the biggest teams and I too, when I was at Honda, it was a big team. But there are things that as a small team we didn’t have in place, and we need to quickly put those things in place as we grow.

“So there’s plenty to do. When he came to the first race, he spent one evening here until everybody’s gone home, talking to all the engineers and mechanics, getting to know them – the tyre engineers, the race engineers, the performance engineers, all the mechanics, the number ones. And so it’s in that mode of learning, if you know what I mean.”

Of course not every new arrival is announced by the Aston Martin team, with Szafnauer revealing that over 150 people have been brought in this year, and that number will rise further.

“Things haven’t slowed down in the recruitment, but unless they’re very senior, we don’t we don’t announce everybody. We’ve hired over 150 people this year, and we will continue to hire,” he said.

“If we want to win a World Championship in four years’ time it does take human resource, infrastructure, factory, wind tunnel, just like the top teams, and we’re on that trajectory to do that.”