Home » Red Bull 'should have taken more points out of Mercedes'

Red Bull 'should have taken more points out of Mercedes' 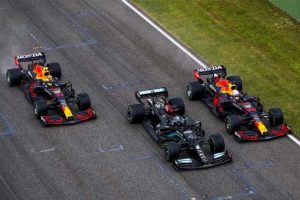 Red Bull team principal Christian Horner felt his team should have taken “a lot more points” from Mercedes in Imola.

They narrowly missed out on victory in Bahrain, with seven-time World Champion Lewis Hamilton winning the season opener, but it was Max Verstappen who took victory at the Emilia Romagna Grand Prix.

His team-mate Sergio Perez, who qualified second, did not have so much of a good day, suffering a 10 second penalty for overtaking during a safety car incident, but despite that, he still came out after the red flag in P4.

A spin on Lap 38 proved very costly, though, as he went wide and spun at the Villeneuve chicane, and that saw him drop down to P14, and he eventually brought the car over the line in P12.

Speaking after the race, Horner said: “He had such a good Saturday, the race just didn’t go his way this afternoon. [He made] a couple of little mistakes, especially the spin behind the Ferrari, I think it was Carlos, so tough for him because we should have taken a lot more points out of Mercedes today, but good pace in the race and there’s still a long, long way to go.”

Perhaps fortunately for Red Bull, Perez’s non-point scoring finish was not punished too much by Mercedes, given that Valtteri Bottas crashed out of the race in controversial fashion.

The victory at the end of the day was most important for Horner’s team, especially given the difficult circumstances in which they missed out on a P1 finish in Bahrain.

Horner added: “It’s always tough to lose a race like we did in Bahrain where it’s so marginal and so to come here [and] get that victory [is great].

“There’s only one point between the two drivers. There’s still a huge distance in this Championship still to run, but it’s by far the best start we’ve had for quite a few years now so we just want to keep building the momentum.

“It’s fantastic for Honda, their first win since Senna in I think ’91 here, so we just want to build that momentum and we’ve got to take it all the way through the year.”

Verstappen‘s victory, from the point that Hamilton crashed, never seemed in doubt, but there was one moment where he almost lost control as the cars prepared to get going again following the red flag.

“I think that’s what they call a tank slapper,” laughed Horner. “A great, great performance by Max today.

“Difficult conditions for everybody, other than that little wobble there, that was the only mistake he made all afternoon, so thoroughly deserved that victory.”