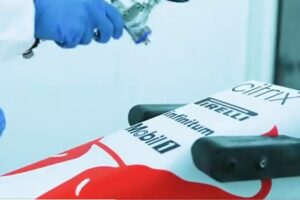 Red Bull and AlphaTauri are to display special Honda-inspired liveries for the Turkish Grand Prix.

In Honda’s final season before they withdraw from Formula 1, this should have been the weekend of their home race at Suzuka.

But the Japanese Grand Prix was one of several cancelled due to the ongoing pandemic, and therefore the commemoration will take place at Istanbul Park instead.

The unique liveries will celebrate both teams’ race-winning alliance with Honda and give the engine manufacturer’s fans in Japan a chance to wave goodbye to the company in F1.

Max Verstappen and Sergio Perez’s Red Bull cars this weekend will have a predominantly white livery, while the AlphaTauris driven by Pierre Gasly and Yuki Tsunoda will feature a one-word message written in Japanese, saying ‘arigato’ which means ‘thank you’.

The reason why white has been chosen is that Honda’s first Formula 1 victory, with both chassis and engine, was provided by American driver Richie Ginther at the 1965 Mexican Grand Prix in that colour of car. Ginther only competed in six more F1 World Championship races after that before retiring.

A 🆕 unique livery 🎨 The Bulls will race in 🤍 at the #TurkishGP 😍

AlphaTauri first linked up with Honda in 2018, when they were still titled Toro Rosso, after the end of an unsuccessful three years for the engine supplier with McLaren. Gasly provided them with a shock victory at the 2020 Italian Grand Prix.

In 2019, Red Bull joined their ‘sister’ team in taking Honda power units and have enjoyed 13 race wins since then, including eight this season – seven of them for Verstappen, who is duelling with Lewis Hamilton for the World Championship.

Red Bull team principal Christian Horner said: “We had all been looking forward to giving Honda’s Japanese fans a chance to celebrate our extremely successful relationship in Formula 1 on home soil at Suzuka.

“With the race falling victim to the pandemic, we just couldn’t let the weekend pass without paying tribute to Honda and their amazing home fans by bringing a little bit of their heritage to Istanbul.

“The livery chosen for our cars pays homage to Honda’s remarkable F1 journey and hopefully we can give fans another victory in those legendary colours this weekend.”

From next year, Red Bull Powertrains, a new enterprise set up at the team’s Milton Keynes base, will take over the engine supply to Red Bull and AlphaTauri.