Red Bull admit they are 'not proud' of Belgium win 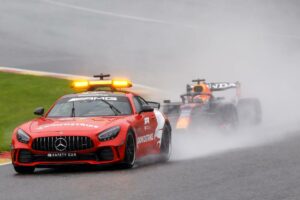 Red Bull’s driver programme boss Helmut Marko says Belgium 2021 will not be on their highlight reel of Formula 1 victories.

After snatching pole from George Russell in the closing stages of Q3 at Spa-Francorchamps, Max Verstappen knew his achievement was important, but he surely could not have predicted just how significant it would later turn out to be.

The weather had been changeable across the opening two days in Belgium, but for race day the heavy showers made way for persistent rain and dull, murky conditions.

Verstappen’s team-mate Sergio Perez crashed on his way to the grid, highlighting just how treacherous the conditions were, and understandably it was later decided that the race would begin behind the Safety Car.

After a formation lap though, the track was deemed too wet for racing, and it was back to the pits for what would be a very lengthy delay.

A couple of hours would pass as the FIA waited for a break in the weather, but as it turned out, those conditions at the originally scheduled race start were actually the best of the day.

The rain would only grow heavier, while the fog rolled in as visibility became non-existent.

The drivers would be taken back out onto the circuit behind the Safety Car for two laps, creating a race classification, at which point it was back to the pits, with the race abandoned shortly after.

This meant victory for Verstappen, and 12.5 points since half points were awarded to the top 10, though Marko said it was not a victory which brings any source of pride to Red Bull.

And for the future, he hopes a better solution can be found for deciding a race result under such circumstances.

“We are not proud of this victory,” he told Sky.

“I think the organisers and the people in charge tried everything to get the race over the line so that the obligations were fulfilled with this compromised solution.

“There was a lot of uncertainty, ‘Is it going to start, is it not going to start?’ It was not a pleasant race day and they should come up with something better for the future.”

It’s a shame the bad weather denied us a proper race. It’s P1, but the real winners are all the fans that stayed at the track in the rain all day 🖤💛❤️ Incredible 🙌 #BelgianGP 🇧🇪 pic.twitter.com/3bJcoBrJK7

As the conditions continued to deteriorate, the question was raised about possibly holding the race on Monday, something which the FIA later moved to confirm would have been impossible.

But Marko felt this could have been a solution, and if not, then he does not understand why the race limped on for hours before its cancellation, rather than the decision being made at the start.

“If the conditions are so bad, you could have done it right at the start [rather] than waited three or four hours,” he said.

“Or you could postpone the race until tomorrow. That would also have been a possibility.”