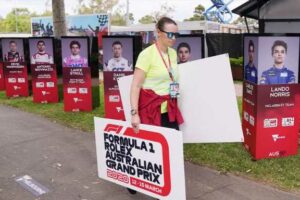 Australian Grand Prix boss Andrew Westacott says he would fear for the race’s future if the 2022 edition joined the previous two in having to be cancelled.

Traditionally the Formula 1 season’s curtain-raiser, the Melbourne event became the first race to fall victim to the pandemic shortly before FP1 was due to begin in March 2020 just as COVID-19 was starting to have a major impact on the world.

The grand prix at Albert Park was not rescheduled last year and has also dropped off the 2021 calendar, originally having been moved from its usual date to November in the hope that travel restrictions to Australia would be eased in time.

However, the picture looks much more promising for 2022, when the Australian Grand Prix has been scheduled for April 10 as the third round of the campaign following Bahrain and Saudi Arabia.

Westacott, the CEO of the Australian Grand Prix Corporation, is “extremely confident” the race will go ahead this time, but knows it must do in order to preserve its chances of remaining on the Formula 1 calendar.

That is because there are countries and venues, including some fresh ones, vying for places on what is likely to remain a 23-race schedule in future years and, like in a game of musical chairs, there is not enough space for all.

Asked during a Q&A with Drive.com whether Australia could disappear from the roster permanently if the 2022 race does not go ahead, Westacott said: “I think it’s a real risk with the amount of competition for slots on the Formula 1 calendar.

“Patience only goes so far and patience can wear very thin. If we weren’t able to take the 2022 event in Australia, I think Formula 1 would be well within their rights to be looking at alternatives to Melbourne.

“I think in one regard, it’s a make or break for Melbourne because on reflection of people talking about us being the major events capital of the world, I think we will need to exhibit the fact we are staging major events for us to start to win back confidence.”

On whether the 2022 race is “a certainty” to be given the go-ahead by the state of Victoria’s government, Westacott added: “I’m extremely confident.

“I won’t use the word certainty because they are a government that needs to govern based on the conditions at any particular time, but I’m absolutely reassured by the dialogue and very strong support we have.”