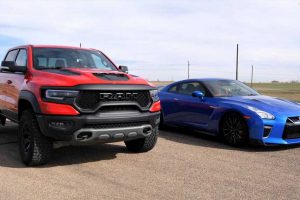 Can Godzilla vanquish the big T-Rex?

The Ram TRX is a fast pickup truck, be it on the road or off. We’ve seen countless videos of the heavyweight in action, defying physics and shocking some properly fast cars in the process. The crew at The Fast Lane Truck are particularly active in racing the Hellcat-powered T-Rex against pretty much anything they can find, but they may have found the Ram’s nemesis in another vehicle with a monster nickname.

Of course, that monster is Godzilla and while you might think it’s an unfair fight for the TRX, let’s consider the contenders. The Nissan GT-R is a current model dishing up 565 horsepower (421 kilowatts) and 467 pound-feet (633 Newton-meters) from its twin-turbocharged V6. The T-Rex positively dwarfs its competitor on that front with 702 hp (523 kW) and 650 lb-ft (881 Nm) of twist from its supercharged 6.2-liter V8. However, it also dwarfs the GT-R when it comes to mass, and we mean seriously dwarfs it. How does 6,400 pounds versus 3,800 pounds sound?

If it sounds like a guaranteed win for the GT-R, on paper you’d be correct. However, there are two interesting aspects about these TFL races worth noting. They take place on a closed course, but there isn’t much room to run so low-end power holds a distinct advantage. And while it’s a closed course, it’s not a prepped racing surface so traction is very much real-world accurate. That’s why the TRX previously humiliated a 760-hp Mustang Shelby GT500 in this very location, so big torque and excessive weight with all-wheel-drive punch might actually win the day.

However, the GT-R doesn’t suffer the Shelby’s real-world traction disadvantage. It also turns all four wheels, and to be honest, the three races between these vehicles have the TRX putting up a good fight off the line. The question is whether the GT-R can make better use of its superior power-to-weight ratio and all-wheel-drive grip once things are moving. You probably already know the answer to that question, but the contest does offer some interesting results that we’ll leave for the video to reveal.