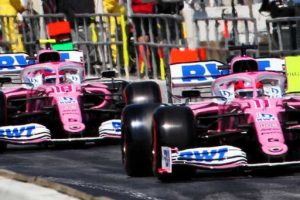 The team have caused quite a stir with their ‘pink Mercedes’ and both Racing Point, along with Ferrari and Renault have lodged appeals over the 400,000 Euros fine and 15-point deduction handed to Racing Point for using illegal rear brake ducts.

There is no denying that the RP20 is a near copy of the Mercedes W10, but the team insisted they did all that through photography and reverse engineering.

Either way, the FIA have updated the regulations for 2020 to stop these kind of actions.

But even with reverse engineering from photographs no longer allowed as of next year, Szafnauer said it has “zero impact” on Racing Point’s team model.

“I don’t think it changes our business model at all. We’re not the most affected team,” he is quoted by Motorsport.com.

“We’ve got 500 employees. The reason we don’t have 700 or 800 like some of the bigger teams is that we lack in-house manufacturing.

“But if you just compare us to everyone else in design, development, aero personnel, we are the same. We’re the same as the big teams.

“It has zero impact. We’ve always been a constructor, from the days of Jordan to the days of Racing Point and everywhere in between. We’ve got the capability of designing, developing, and constructing all of our own components.

“It will have zero impact on our business model. If the rules become more clear, we will stay within the bounds of those rules. Absolutely no problem.”

📈 We're going up in the world!

12 points for @lance_stroll means he rockets up to fifth in the Drivers' standings! 🚀#SpanishGP #F1 pic.twitter.com/ADl0PDNIRO

Racing Point will be able to use the RP20 for 2021 when they become Aston Martin, but will have to design their own car under the new regulations for 2022.

As for the current season that RP20 is working well for Racing Point – the team find themselves P3 in the Constructors’ Championship behind only Mercedes and Red Bull.

But, their is a chance that they could slip down the order a little since only one upgrade is projected to arrive this season.

So, if rival teams develop at a faster rate, then Szafnauer said it’s just something the team will have to live with.

“Our only upgrade will probably be ready for Monza,” Szafnauer is quoted by Grandpx.news.

“If the others keep on developing, they will get closer and closer and be faster on some tracks. We will have to live with that.