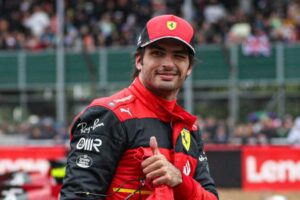 Carlos Sainz secured his maiden Formula 1 win at the British Grand Prix, part one of Sunday’s race red flagged after a horror crash for Zhou Guanyu.

From red flags to protestors to a reformed grid, bodywork damage and a Safety Car, the 52-lap British Grand Prix had a bit of everything.

But the most important part was that Zhou was said to be okay after his race ended when his Alfa Romeo went flying off the circuit upside down before the gravel at Abbey launched it over the tyre barrier and into the catch fencing.

Alex Albon, also involved in the opening lap crash, was taken to a local hospital for further checks but was soon released back to the paddock.

Part Two of the grand prix saw a reset of the qualifying grid, Sainz given a shot at redemption.

Despite team orders from Ferrari and a seemingly faster Charles Leclerc, the Spaniard made the most of a late Safety Car – and a mistake from his team-mate – to regain the lead which he held through to the chequered flag.

He took his first win ahead of Sergio Perez and Lewis Hamilton.

With the drivers free to make their own tyre choices, Max Verstappen surprised as he went with the soft tyres to pole-sitter Carlos Sainz’s mediums. That gave the championship leader the 7m boost to take P1 off the Ferrari.

A big accident further back had the race red flagged, George Russell, Zhou Guanyu, Alex Albon, Yuki Tsunoda and Esteban Ocon involved with the latter two able to crawl back to the pits.

Zhou and Russell collided, the angle of the impact flipped the Alfa Romeo which went flying off the track and through the gravel at Abbey. Digging into the gravel, the car jumped the tyre barrier before crashing into the catch fencing. He was treated by the medical team, extracted from his car before being taken to the track’s medical centre. The driver was thankfully said to be okay, “conscious and no fractures”.

Albon was also treated at the medical centre, the Williams driver having taken a hard hit nose first into the concrete barrier along the pit straight. He was “transferred by helicopter to Coventry Hospital for precautionary checks following the opening lap incident” reported Williams.

The race restarted at 3:56pm local time with 17 runners on the grid as Mercedes, despite getting Russell’s car back to the pits on a flatbed truck, wasn’t permitted to start. The FIA released a revised grid, based on Saturday’s qualifying, with Sainz back up in P1 ahead of Verstappen, Charles Leclerc, Sergio Perez, Lewis Hamilton, Lando Norris, Fernando Alonso, Nicholas Latifi, Pierre Gasly and Valtteri Bottas making up the top ten.

British Grand Prix 2.0 had Verstappen join the Ferraris on the medium tyres, Sainz getting his elbows out to keep Verstappen at bay while Leclerc battled not one but two Red Bulls, the Monégasque driver staying ahead of Perez before fighting Verstappen.

Leclerc came away from it with slight damage to his front wing as too did Perez, the Mexican driver P4 ahead of Norris, Hamilton, Gasly and Alonso. Yuki Tsunoda and Esteban Ocon up into the top ten.

Perez pitted for repairs, falling to the very back of the field, Hamilton overtook Norris, Sebastian Vettel, who started on the soft tyres, pitted after eight laps for mediums and replaced Perez in the P17 slot.

Two laps later Sainz went flying off the circuit at Becketts, caught out by a gust of wind, to hand Verstappen P1 but he was soon back in the lead as the Dutchman suffered a puncture having run over a piece of carbon fibre on the kerb at Copse. Verstappen rejoined in sixth place, 21s down, the driver still unhappy about something. “The car is 100% broken”. He was told that is bodywork damage but not “critical”.

As Verstappen’s challenge fell away, Hamilton’s came to the fore.

17 laps in Leclerc was not happy with his team-mate’s pace, complaining: “What do I need to do? I am f*cking up my race” as he ran behind his team-mate with Hamilton closing in, and closing fast. Sainz was the first to pit, followed by Leclerc and – eight laps later – Hamilton, a slightly slow stop costing the Mercedes driver as he came out three seconds behind Sainz but on fresher tyres, the race on for the victory.

Leclerc moves up to P2, Sainz drops back to P3 #BritishGP #F1 pic.twitter.com/y5tyKCRmxg

Ocon changed the course of the race on lap 40 when he stopped out on track, the sixth retirement after Bottas and Gasly both pulled into the pits. The positioning of his car meant out came the Safety Car, Leclerc stayed out, Sainz and Hamilton and Perez all pitting. 16 lap hard tyres versus two-lap old soft tyres.

Back racing, Leclerc held the lead ahead of Sainz only to run wide, the Spaniard up into P1, while Perez attacked Hamilton for third, running ahead of Alonso, Norris and Sebastian Vettel. While Sainz scampered off into the distance, Leclerc, Perez and Hamilton fought over second,  both Leclerc and Perez off the track in the battle.

Sainz raced to the win, his first-ever in Formula 1, taking the chequered flag ahead of Perez and Hamilton, who completed the podium with their thrilling late-race tussle. Leclerc had to settle for fourth ahead of Alonso and Norris. Verstappen recovered to P7 ahead of Mick Schumacher, Vettel and Kevin Magnussen.