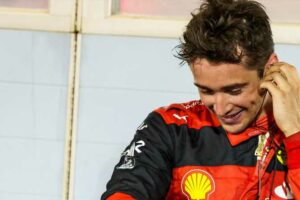 Charles Leclerc will start the first Australian GP since 2019 from pole position while for Nicholas Latifi and Lance Stroll it was a day to forget.

Back on track at the Albert Park circuit, qualifying was blighted by two crashes of which the first involved Latifi and Stroll, the duo colliding in Q1. They’ll start at the back of the grid.

Q3 yielded the second crash, a hustling Fernando Alonso losing hydraulics and hitting the Turn 11 wall, leaving him down in 10th place.

In pole position, though, is Leclerc who claimed the coveted grid slot ahead of Max Verstappen by 0.286s seconds.

Sergio Perez will line up P3 ahead of Lando Norris.

After a shock P1 from Lando Norris in final practice, Formula 1 was back to its usual service at the top with Red Bull and Ferrari fighting for the top spots with Max Verstappen P1 with a 1:18.580.

As his rivals battled to make it through to Q2, Lance Stroll was one of the last drivers to venture out, the Canadian having to wait as Aston Martin repaired his car after his FP3 crash.

But it was not his day, Stroll and Nicholas Latifi making contact as the Williams tried to pass for track position, the Williams losing its rear wing before ending up nose first in the barrier.

“Beep Latifi, what the beep is he doing? He just hit me man,” said Stroll while Latifi told Williams that he didn’t “understand what he was doing, he wasn’t looking in his mirrors”.

Stroll’s AMR22 also suffered damage, both drivers out of qualifying with Latifi slowest of all and Stroll with no time to his name.

Latifi and Stroll collide in the first sector and both are out of qualifying#AusGP #F1 pic.twitter.com/lhb5OHUKM7

Stroll’s crash meant Aston Martin had time to repair his team-mate Sebastian Vettel’s car, the driver joining the queue for when the session resumed with 2 minutes on the clock.

The German only made it up to P18, out along with two who crashed, as well as Alex Albon and Kevin Magnussen. Williams’ troubles were compounded as Albon stopped on his in-lap

Q2 was more of the same at the top, although the Red Bull on top was Sergio Perez, who will be investigated after qualifying for failing to slow under yellow flags.

There a bit of drama for Verstappen and Lewis Hamilton, the latter complaining that the Red Bull was in his way on a hot lap. Verstappen did move over to the left but not by a large margin, the 24-year-old asking his team if Hamilton had been a lap. Told yes, he beeped.

Fernando Alonso was the nearest challenger to the Red Bulls and Ferrari while out went Pierre Gasly, Valtteri Bottas, Yuki Tsunoda, Guanyu Zhou and Mick Schumacher. It was the first time since 2016 that Bottas did not make it into Q3.

Valtteri Bottas’ streak of consecutive Q3 appearances has come to an end at 103 😩 #AustralianGP #F1 pic.twitter.com/8vRSJXrg9B

One by one the drivers into Q3 asked their teams, some more politely than others, for helmets with darker visors as the setting sun wrecked havoc. Verstappen was on course for an incredible lap, quickest in the first two sectors, only to make a mistake into the final corner.

That opened the door for Perez to go quickest, followed by Leclerc with a 1:18.239. And then reds were out…

Alonso, who was hustling, went sideways into the wall at Turn 11 after going in too deep on the brakes. He told Alpine: “I lost hydraulics, I could not change gear”.

Red flag as Alonso has crashed in Q3🚩

Back on track with seven minutes on the clock it was all to play for.

Perez improved but fell short, Verstappen went fast enough to take provisional P1 but then Leclerc went purple, green, purple to pip the Dutchman with a 1:17.869, Verstappen 0.286s down.