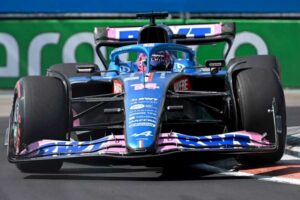 Alonso had already been docked five seconds during the race, that coming after he had a look down the inside of AlphaTauri’s Pierre Gasly, resulting in contact as the latter turned in.

He was then later placed under investigation for leaving the track and gaining an advantage, with the stewards once more finding Alonso guilty, ruling that the Spaniard had gained a lasting advantage by going off at Turn 14.

And with that verdict, he drops from P9 to P11, meaning he remains on two points for the 2022 season so far. Alonso did add another point to his superlicence though.

It makes for happy reading over at Williams, with Alex Albon now promoted to P9 and scoring two points.

📣 Fernando Alonso drops out of the points in Miami with a five-second penalty for leaving the track and gaining an advantage.

Daniel Ricciardo has dropped from P11 to P13 for the same offence.#F1 🇺🇸 #MiamiGP

McLaren’s Daniel Ricciardo has also slipped down the Miami order after being hit with a five-second penalty, that also coming after being judged to have left the track and gained an advantage.

Ricciardo had narrowly missed out on the points at the first-ever Miami Grand Prix, crossing the line P11, but intervention from the stewards changed that.

The McLaren driver, after going off at Turn 12, was judged to have kept his position ahead of Haas’ Kevin Magnussen by doing so, thus gaining a lasting advantage.

The stewards then decided to issue a five-second time penalty, meaning that Ricciardo is now classified as the P13 finisher at the Miami Grand Prix.

In addition, Ricciardo also received a penalty point, taking him to two on his superlicence for the 12 month period.

“The stewards reviewed the video evidence and determined that although Car 3 [Ricciardo] was in front of Car 20 [Magnussen] going into Turn 12, it was only able to retain that position by leaving
the track and returning to it alongside Car 20 then used its speed to pull ahead,” the stewards determined.

That result then means that it is still just the one top 10 finish for Ricciardo in 2022.

Aston Martin’s Lance Stroll will not be complaining though, as with Alonso and Ricciardo both picking up penalties, it means he improves from P12 to P10 and scores a point.

The stewards were more lenient with Sebastian Vettel and Mick Schumacher, deciding to take no further action after their collision towards the end of the race.

Magnussen was also cleared of wrongdoing after he and Stroll had made contact.