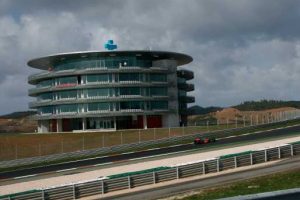 The upcoming Portuguese GP could end up being a closed event after all thanks to a surge in COVID-19 cases.

Reuters are reporting that Portugal’s health authority have confirmed that they are reconsidering whether or not to allow fans to attend the event which is set to take place at the Algarve International Circuit between October 23-25.

A surge in COVID-19 cases is behind the uncertainty, and the other option on the table, according to the report, is to reduce the number of fans that can attend. This was confirmed by the head of the DGS authority, Graca Freitas, at a news conference.

The problem is over 28,000 tickets were sold for the event as early as August, with ticket sales in September then described as “crazy” with a projected attendance figure of 45,000 each day.

“In the first week we went online with our ticket sales, it was crazy,” the circuit’s event and commercial director Miguel Praia previously told Autosport.

“Formula 1 is so popular in Portugal and the fans are very eager to attend the event as F1 returns to our country.

“At the moment we have sold over 30,000 seats already and 95% of our corporate boxes are sold out. Now the summer holidays have ended, we expect sales to pick up again with a final boost.”

The Algarve circuit has capacity for 90,000 grandstand seats, but following an agreement with the government only half of these were set to be occupied for the F1 race weekend.

The global pandemic caused the initial grands prix on the calendar to be held as ‘closed events’ with no fans in attendance.

But slowly that situation has started to change. A limited number of fans were allowed through the gates for the first Tuscan Grand Prix at Mugello, and the Russian Grand Prix at the Sochi Autodrom was watched by over 30,000 fans from the grandstands.

Following that the Eifel Grand Prix at the Nurburgring saw an attendance of 20,000 permitted.

The Portuguese Grand Prix will be round 12 of the Formula 1 season, and it would prove a blow to Formula 1 if the event wasn’t able to continue the trend of getting fans back through the turnstiles.

The Emilia Romagna Grand Prix at Imola which will follow Portugal is also set to have fans in attendance, as is the returning Turkish Grand Prix which will be held from November 13-15.