Porpoising meeting set for F1 technical chiefs and the FIA 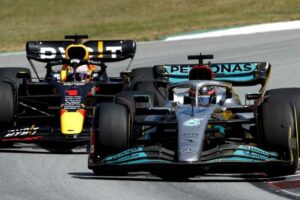 After the FIA’s Canadian GP technical directive was met with criticism, the FIA will now sit down with the team’s technical directors to discuss potential solutions for porpoising.

Motorsport’s governing body announced a new technical directive on the eve of the Canadian Grand Prix, one aimed at protecting the drivers from the effects of porpoising after growing concerns about their long-term health were raised after a bouncy Azerbaijan Grand Prix.

As per technical directive TD039 the FIA will lay out a “quantitative limit for acceptable level of vertical oscillations”, the numbers based on data that the teams will send on after Friday’s practices.

The teams, though, have a lot of questions about it, the biggest one being what will be considered an acceptable level of vertical oscillation.

“Who dares to say that 7g or 8g is the limit?” an unnamed team boss told Auto Motor und Sport. “There is no expertise whatsoever as to what is still acceptable and what isn’t.”

That it is a TD is also in itself confusing for the teams as technical directives explain the regulations, they don’t change them, prompting Ferrari to question whether this is within the FIA’s mandate.

“For us, that TD’s not applicable,” team boss Mattia Binotto told The Race. “And it’s something we mentioned to the FIA.

“A TD is there to clarify regulations, or to address policing. It is not there to change the regulations. That’s [a matter of] governance.”

Along with last Thursday’s TD came the freedom for teams to put a second stay to held stabilise the floor, a change to the regulations that the likes of Red Bull and Ferrari are opposing.

It all led to a heated clash between Christian Horner and Toto Wolff on the Saturday of the Canadian Grand Prix with the Mercedes motorsport boss said to have gone “full Abu Dhabi spec” with Horner said to have mocked him for doing so for the Netflix cameras.

And Christian Horner, it's being reported, 'mockingly asked Toto Wolff if his tantrum was just for the cameras'… #F1https://t.co/GN9hiGc8zO

Realising the teams will not reach consensus on the issue of porpoising, the FIA will now hold talks with the teams’ technical directors to find a way forward.

Motorsport.com reports that it is ‘hoped that moving discussions away from the heat of competition over a race weekend will allow for a more considered approach in trying to put in place solutions.

‘The topics of discussion are likely to involve analysis of the data that the FIA gathered on vertical oscillations over the Montreal weekend, and whether or not it is feasible to try to impose limits at some point in the future.

‘The FIA also wants to download information from teams about potential changes to the technical regulations for 2023 that could give them more scope to cure the porpoising issues longer term.

‘This could include aero changes, revised suspension systems or even the unbanning of tools like mass dampers.’

Red Bull, though, have already called the FIA’s intervention “overtly biased to sorting one team’s problems out” while Wolff has again highlighted the “responsibility to not take this [drivers’ health] lightly”.