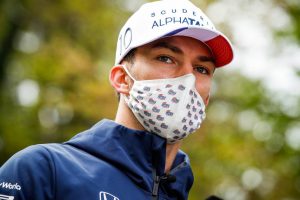 Pierre Gasly believes AlphaTauri’s showing in Friday practice ahead of the Emilia Romagna Grand Prix was one of their best yet.

Gasly was able to place his AT02 P5 in the standings come the end of the first session, while FP2 was then an even greater success as the Frenchman improved to within a tenth of the pace-setter Valtteri Bottas to finish P3.

“It was one of our best Fridays. P5 this morning, P3 this afternoon and so close to the top,” Gasly told reporters.

“It has been a really good day for us and I felt good in the car since the first lap, I manged to push pretty hard and drive the way I want. I think we are looking pretty good.

“We focused on the short run initially with the soft tyres which looked pretty good pace wise, and then after we did a couple of laps in high-fuel for the race and just to have a first feel with the degradation.

“On Sunday I think the conditions are going to be quite different, but we managed to go through all the run plan we had and I’m pretty happy with how the day went.”

Gasly would set the fastest time of the long run simulations in FP2, but since he was using the soft tyres compared to Mercedes on the mediums, he does not expect to be competing with the Brackley outfit as the race weekend progresses.

“I think we have to stay quite calm and focus on our targets. We know that Mercedes have a much faster car than we have, and obviously we know they have margin, they were on mediums,” he said.

“We are just focusing on how to improve our pace against our main rivals, which I guess are Ferrari, McLaren and Alpine.”

? Friday from these boys once we got going. Let's have some fun tomorrow ⚔️? #ImolaGP ?? #PoweredByHonda pic.twitter.com/ukdLabt70u

On the other side of the garage Yuki Tsunoda had a mixed day as he took a trip into the gravel during FP1, from there completing only 11 laps.

But the afternoon session was a more positive story for the Japanese racer who spent time at Imola in pre-season testing the AT02.

“I didn’t manage to complete many laps during FP1, due to an issue, and only completed four push laps in total but the car felt good whilst I was out,” he said.

“The team fixed the issue during the break and I was able to build-up my pace in FP2 as I continued to push more – hopefully I’ll be able to improve again in tomorrow’s practice session ahead of qualifying.

“I’ve completed a lot of laps here pre-season, but I think I still managed to gain a lot from the sessions today. I particularly learnt about tyre management around this circuit and have a lot of data from the softs that I can now go and analyse.”