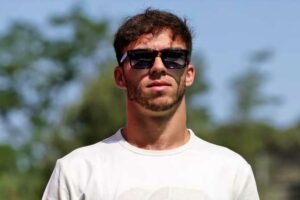 Pierre Gasly was handed a five-second penalty after being adjudged to have been wholly at fault for causing a collision with Lance Stroll.

Late on in the race, the AlphaTauri clipped the Aston Martin to send Stroll on a spin and the incident was then reviewed by the stewards.

They determined that Gasly was the only guilty party and handed him a five-second penalty alongside two penalty points, taking the Frenchman up to a total of four for the 12-month period.

Gasly himself said he took responsibility but did describe it as “hard racing.”

In their notes, the stewards recognised that a lack of grip had caused the incident.

“The Stewards reviewed the video evidence. Stroll was fully alongside on the outside of Gasly from turn-in to the apex, and gave Gasly sufficient room.

feels great to be back in the top 10 again 😎

but it was a tough day for @PierreGASLY as he damaged his front wing on the opening lap which compromised his race pic.twitter.com/7Tw0p01epi

“Gasly understeered into Stroll and the Stewards found him wholly at fault for the collision, although the collision was more due to a lack of grip,” the statement read.

It was one of two post-race penalties handed out with Alex Albon receiving a five-second penalty and one penalty point for leaving the track.

Despite his penalty, Gasly was still able to finish ahead of Stroll and ended P13 behind McLaren’s Daniel Ricciardo.

His AlphaTauri team-mate Yuki Tsunoda performed better having made it into the points places in P10. It is the third time in as many races that the Japanese driver has finished ahead of Gasly.

The team reported that the Frenchman suffered damage to his front wing during the opening lap which explained his lack of pace throughout the race.

AlphaTauri are seventh in the Constructors’ Championship with Gasly 13th in the Drivers’ Standings and Tsunoda 11th.