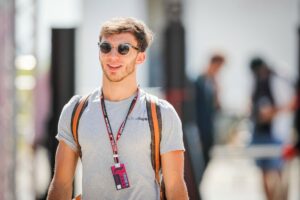 Pierre Gasly feels the start he has made to the 2021 season is his best in Formula 1, and is excited about what is to come.

The AlphaTauri driver has been one of the most impressive drivers of the campaign so far, picking up one podium finish and 50 points to sit P8 in the standings during the summer break.

He is also one of only two drivers, along with George Russell, to have a perfect 11-0 qualifying record over his team-mate, with Yuki Tsunoda struggling to get near his level of performance.

It is Gasly’s second strong start to a season in a row after he enjoyed a lot of early success last year too, even winning the eighth race of the campaign.

He thinks how he has started this year is even better that though.

“I think it was probably the best start of the season I’ve ever had in F1,” he said, quoted by Crash.net.

“It was really successful. We’ve managed to secure one podium in Baku already this year, which was the highlight of these first 10 races.

“We’ve had great Saturdays, great qualifying, putting the car in Q3 for most races and this is a great achievement. I think on Sundays it started not as great, but we’ve managed to make some progress and managed to fight some pretty fast cars – sometimes the McLaren, sometimes the Ferrari.”

Thanks largely to his efforts, AlphaTauri are well in the mix to take P5 in the Constructors’ Championship this season.

With Sebastian Vettel’s disqualification from the Hungarian Grand Prix confirmed, Gasly’s team are 20 points ahead of Aston Martin and only nine behind Alpine in P6.

If they can finish in the top five, it would be the team’s best season ever – and Gasly has set it as his goal to help make that happen.

“We can see our battle in the championship shaping up with Aston Martin and Alpine,” the Frenchman added.

“We are fighting for the fifth position in the championship, which has never happened for the team before. It just shows we are having a great year and it is my personal target to bring this position to these guys and this would be a first.

“It’s a pretty exciting season so far for us.”