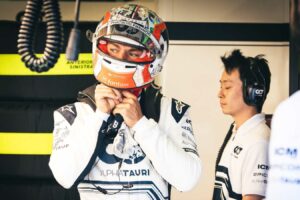 Pierre Gasly said AlphaTauri taking a “simple” approach to qualifying in Baku yielded rewards, as he secured his best grid slot of the season on Saturday.

Gasly and team-mate Yuki Tsunoda have looked fast all weekend so far, with both AlphaTauri drivers having got through to Q3 in Azerbaijan and the Frenchman placing his car between both Mercedes drivers after an impressive final run.

AlphaTauri have not been as competitive as they were last season, with Gasly having taken just six points so far this year, compared to 27 at the same stage in 2021.

He believes that the team did not find the right approach at the last street circuit in Monaco, but decided that not over-complicating their qualifying strategy paid dividends, as he will prepare to start on the third row for the first time this season.

“We showed some really good pace all weekend, but we did the same in Monaco and didn’t get it right in qualifying.

“So it was important to keep everything simple, and that’s what we did. And to split the two Mercedes was clearly better than what we had hoped for. So, good position for tomorrow.”

On the other side of the garage, Tsunoda will start eighth in what turned into a tight qualifying session in the battle for ‘best of the rest’ behind Ferrari and Red Bull.

He has been showing a solid turn of pace all weekend as well, despite a minor mishap in Q2 that saw him tag a wall on a flying lap – but he was undamaged and still managed to get into the top 10.

With that, he was pleased with his day’s work on Saturday.

“Yeah, I’ll take it definitely,” he said in the paddock after qualifying. “Especially [after] the things I had in Q2.

“That completely was my mistake hitting the wall on the new tyre run, but luckily I went through [to] Q3.

“Also I will say my lap in round one in Q2 was quite good with old tyres, I’m happy and Q3 was definitely the thing that was on the plan had to do.

“Had to do really, really old tyres first run and switch o new tyres, [the] difference was quite big, but anyway, I think as a team we did a fantastic job.”