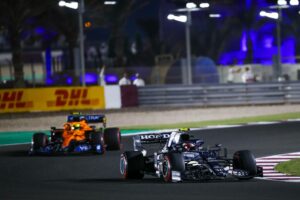 A maiden front-row start in Formula 1 for both Pierre Gasly and his AlphaTauri team turned sour with a “shocking” lack of pace at the Qatar Grand Prix.

Although Sebastian Vettel won the 2008 Italian GP from pole position for Toro Rosso, this was the first time Red Bull’s ‘sister’ squad had been as high as P2 on the grid since their change of name last year.

Gasly was the main beneficiary of grid penalties issued to Max Verstappen and Valtteri Bottas pre-race that promoted him from fourth – and left him as Red Bull’s main hope off the line of taking the fight to pole-sitter Lewis Hamilton.

But that did not materialise and the Frenchman quickly found himself passed by Fernando Alonso, with things only getting worse from there – Gasly eventually came home 11th and his team-mate Yuki Tsunoda, who had started eighth, was down in 13th.

The result continued a depressing pattern for AlphaTauri, whereby regularly they fail to reproduce their strong qualifying performances on a Sunday.

“I think it’s fair to say we just didn’t have the pace the whole race,” Gasly told reporters afterwards. “Our pace was shocking, basically.

“We were just nowhere. We both started, with Yuki, in the top 10 and both finished outside the top 10 with no pace the whole race.

“Honestly, I don’t have the answers. Even when I was trying to push as hard as I could with the two-stop strategy we had, I never could match the McLaren (of Lando Norris) and the Alpines. Very frustrating.”

Regarding a reason, Gasly was perplexed but one explanation could be that changes were required to his car after he broke his front wing and sustained a puncture just before the end of qualifying.

“We used our two [sets of] mediums in qualy so they were not new in the race. I don’t know if that had an impact.

“There were a couple of things that were different to usual, but very frustrating not to be able to fight with all these guys.”

For the past couple of races, AlphaTauri have been level on points with Alpine for fifth place in the Constructors’ Championship but now trail by 25 after Esteban Ocon joined podium-finisher Alonso in the top five.

“It’s tough, but at the end of the day we just need to be objective with ourselves and they did a much better job than we did. It’s as simple as that,” said Gasly.

“They finished third and fifth and we started in front of these two cars – they were a lot faster than us today and there’s nothing we can do.

“They just did a better job and congrats to them, and we will try to do as good as we can for the last two races.”