Home » Racing » Pencil Kevin Harvick Into NASCAR’s Championship Race but Who Joins Him?

Pencil Kevin Harvick Into NASCAR’s Championship Race but Who Joins Him? 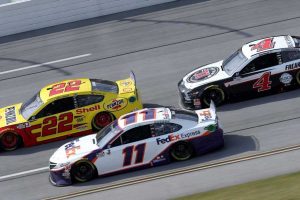 Who will join him amongst the seven remaining contenders remains an open question.

There are just four races left in the 2020 season and the next three will determine the complexion of that championship race in the Valley of the Sun. The four that advance, either on wins, or championship points will have an equal opportunity to take the championship.

For the seventh season in a row, the best finishing driver of the four in the championship race at Phoenix captures the crown.

So, what makes Harvick such a lock? Take a look at the updated standings entering the Round of 8 that includes Kansas Speedway, Texas Motor Speedway and Martinsville Speedway.

Harvick already has over a full race worth of points lead over the elimination cutline. He earned that by virtue of his regular season and early playoff success. Playoff points are earned through race wins or stage victories and they carry over from round to round as a sort of safeguard against one fluke result upending an entire championship season.

Of course, it’s not impossible for Harvick to be eliminated, but it would take a significant implosion over the next three races, and Brad Keselowski knows it too.

“It feels that way, yeah, it feels that way,” Keselowski said during a Thursday media teleconference. “Denny is not completely out of my reach. He’s 19 points or something in front of me … so I think I’ve got a shot at legitimately racing him on points, but probably the others don’t.

“With respect to that, I think Kevin’s a pretty good ways away from everybody.”

That’s important because even if three drivers below the cutline on points all win their way in over the next three races, Harvick would advance by virtue of just staying out of trouble. Similarly, that presumptive battle for second in points between Keselowski and Hamlin could be the difference in elimination if two drivers below the cutline win their way in and neither of the frontrunners reach victory lane.

These aren’t likely outcomes, but you start doing a lot of math when you think about the different scenarios that could play out, especially with two intermediate tracks at Kansas and Texas to open the final multi-race round.

Remember that Kurt Busch won his way into the Round of 8 last month at Las Vegas by virtue of a timely caution, with the benefit of clean air and the NA18D rules package, while driving a car that hadn’t cracked the top-10 all afternoon.

At the time, he was at the bottom of the playoff grid, but suddenly didn’t have to worry about points at Talladega and the Charlotte Roval.

Talk about a weight lifted off the shoulders

So, don’t count anyone out, especially with the round ending at Martinsville, where championship paths have routinely been won and lost in its previous incarnation as the opening race for the Round of 8.

Busch and Bowman enter as longshots at 18 and 21 points out, and they know they likely need a win, too.

“It’s probably going to take a win to make the Round of 4,” Bowman said after advancing on Sunday night. “Just going to go all in and do everything we can to make that happen.”

There is a good chance that the points as they run box could get permanently burned into your screen if you’re watching every lap of every race in the Round of 8.

It will be the most vital statistic when it comes to the championship.

Regardless who can or can’t win their way in, the points battle on the bubble of the elimination cutline makes the next three weeks some of the best racing NASCAR has to offer throughout the field.

Every stage point and every running position will be magnified to the maximum degree.

Unlike the first round, where there is usually three-to-four expected early eliminations, the Round of 8 is typically comprised of the best drivers, best engineers and fastest cars.

Especially under the current format with the playoff points providing a buffer against fluke outcomes, it’s really challenging to advance into the championship race without some degree of regular season success.

From that standpoint, it will be interesting to see if Busch and Bowman can make a run over the next three races because their 2020 resumes candidly don’t compare to the statistics of Harvick, Hamlin, Keselowski, Elliott and Logano, even if their career accomplishments or projections indicate they can reach that level.

The next three weeks are where Bowman and Busch can prove they belonged all along, just like Logano in 2018 when it was ‘The Big Three and me’ racing for the championship at Homestead-Miami Speedway.

“This is exactly where I want to be,” Logano said on Sunday when asked about the comparisons from that season to 2020.

Logano rewrote the narrative that fall en route to his first championship. All of this is to say legacies will be decided over the next month, regardless of what preceded it, as long as a team made the Round of 8.

Who do you have making NASCAR’s version of the Final Four? Tell us in the comments section below.