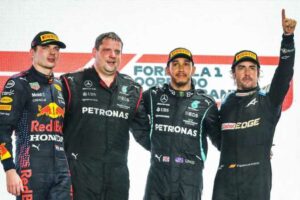 Alonso and Hamilton have proven themselves some of the most gifted drivers in the sport and between them have a combined nine World Championships.

While Verstappen and Leclerc represent the next generation with the Dutchman already having one world title in the bag and the Ferrari driver currently in pole position to take home this year’s crown.

De la Rosa, who competed in over 100 F1 races, was speaking to the F1 Nation podcast when he recalled an incident with Hamilton at the McLaren simulator in 2009.

With the arrival of the Abu Dhabi Grand Prix to the calendar for the first time, both he and Hamilton were spending some time getting familiar with the track.

The Spaniard arrived early and said he worked all morning before feeling comfortable.

This footage of Leclerc’s battle with Verstappen is absolutely incredible 😯

“I saw Lewis adapt to new tracks in the simulator, with exactly the same approach in getting used to a new track behind the wheel of a real car,” De La Rosa said.

“For example, it took me several work sessions to remember Abu Dhabi when this was new in the simulator. I spent all morning working on the simulator, accumulating several laps.

“Lewis, on the other hand, arrived at lunchtime, when I was already quite satisfied with the work done.

“He went to the simulator and asked me: ‘Is the first corner to the left or to the right? At that point I pointed out to him that he hadn’t checked the track map, and he confirmed this forgetfulness, and I told him it was ‘a left-hander, third gear to the left’.

“After three laps, only three laps, he did exactly the same time that I had done in the morning. This is true, and I’m not very proud of it.”

The 51-year-old highlighted this ability to adapt quickly as what sets the sport’s very best aside from the rest.

“Under normal circumstances, I could equal his lap time too – he added – the problem is when the tires degrade, you have more fuel or there are particular conditions such as rain and wind.

“The difference is that Lewis – like Alonso, Verstappen and Leclerc – adapt faster.

“If you put on a new set of tires, they will pick up extra grip. It would have taken me two more laps, which is obviously when you are losing the peak of the tire. It’s the beauty of working with guys like them, they’re really special.”