Part Of Spa-Francorchamps Is Being Resurfaced After Catastrophic Flooding 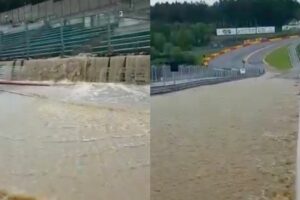 A day before fog stopped play at the 24 Hours of Nurburgring, Spa-Francorchamps was dealing with its own severe weather problems 70 miles away in Belgium.

Heavy rain brought the on-track action of the Spa Euro Race to a halt at 3pm, and although cars were let back out on track once conditions improved, the red flag came back out at 4pm. What circuit officials called a “sort of tsunami” cascaded onto the circuit after the Rohon river – which feeds the famous Eau Rouge stream – burst its banks.

The section of track leading up to the Eau Rouge/Radillon complex looked more fit for a race involving boats than cars. The fast-flowing water broke up the track surface and flooded the Ster, Eau Rouge and Blanchimont tunnels.

The track and tunnels described were by ES Motorsport as “falling apart”. The team, which was originally due to compete in round one of the Lotus Cup Europe last weekend, posted multiple images and videos of the weather-based carnage.

In the end, the whole weekend programme of racing was canned. Spa has been quick to repair the damage, though. Contractors were out in force at the weekend resurfacing the broken up track surface, repairing damage to circuit walls, and clearing out the mud and other debris brought in by the floodwaters.

Although the work looks pretty intensive, Spa-Francorchamps won’t be out of action for long. As of Saturday, the circuit was aiming to be back up and running by Tuesday (8 June).