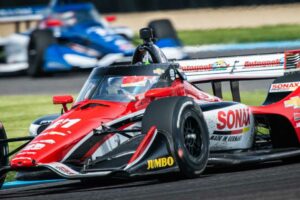 The 2021 NTT IndyCar Series season is well on its way to going down as one of the more historic, or at least competitive, campaigns in recent memory of American open-wheel racing for several reasons.

First, let’s start with the obvious: Race fans, be they aficionados of IndyCar, Formula 1, NHRA, sprint cars and other four- and two-wheel genres, love to talk about parity, passing on track for the lead, and equal performance. Saturday’s IndyCar winner, Rinus VeeKay, is the fifth different driver to take the checkered flag in as many races this season.

You can’t have better parity than that.

Second, in only his third IndyCar race, former F1 driver Romain Grosjean not only started from the pole—his first in 10 years and first-ever in IndyCar—but led the most laps (44) and finished a strong second behind VeeKay.

Third, with 12 races remaining in the 2021 season, including the 105th Running of the Greatest Spectacle in Racing, the Indianapolis 500 in two weeks, IndyCar is riding a wave of momentum that is not only getting noticed here in the U.S., but also around the world.

As NBC IndyCar lead announcer Leigh Diffey said of the current crop of IndyCar drivers in his race telecast wrap-up Saturday, “They come from all over the world. There is a healthy contingent of Americans and internationals. That’s what makes IndyCar so intriguing.”

Meanwhile, even though it remains the premier series in open-wheel racing around the world, Formula 1 continues to struggle. Over the last three-plus seasons, F1 has not only suffered a continued drop in fan attendance, TV viewership and overall interest, let’s face it, it gets kind of boring and tiring for many race fans around the globe when the same drivers take home all the hardware. 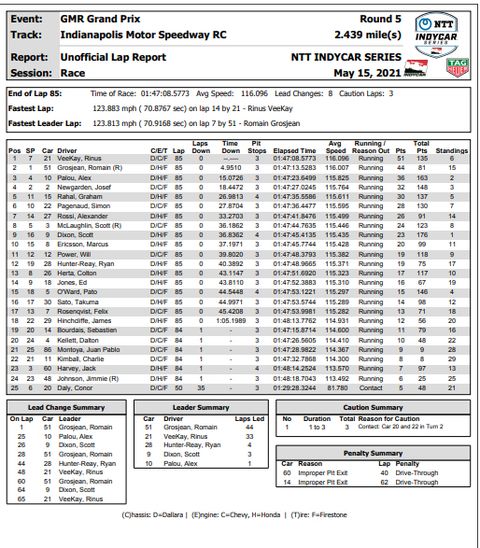 Mercedes’ Lewis Hamilton has won the last four F1 crowns and six of the last seven. Nico Rosberg, who was Hamilton’s teammate, was the only driver to snap Hamilton’s run with the 2016 championship. And before that, Sebastian Vettel won four straight crowns from 2010 through 2013.

Do the math: just three drivers have won the F1 championship in the last 11 seasons.

Add that last decade domination, as well as the start of 2021, and you get one readily apparent overall analysis: F1 is not exactly a series in which more than two or three drivers have a legitimate chance to win on any given week.

Now look at IndyCar: In that same 11-year stretch from 2010-2020, there have been six— count ‘em SIX—different champions (albeit Scott Dixon has won four titles, along with two each for Dario Franchitti and Josef Newgarden during that same period.

Let’s also not forget that in the first five races, VeeKay, O’Ward and Palou are all first-time winners (with Grosjean and McLaughlin knocking on victory’s door with also having very promising performances in their respective first seasons in IndyCar).

And that’s not including many of the veteran IndyCar drivers who are also from other countries such as six-time champion Dixon (New Zealand), Power (Australia), Simon Pagenaud (France), James Hinchcliffe (Canada), Helio Castroneves (Brazil), Takuma Sato (Japan), Tony Kanaan (Brazil) and Max Chilton (Great Britain). And don’t forget Juan Pablo Montoya (Colombia), who is taking part in only Saturday’s GP as well as going for his third Indy 500 win in two weeks.

If you don’t think that kind of ethnic and cultural diversity—not to mention the opportunity for what drivers think about just as much as money, namely, wins—isn’t being noticed among the F1 ranks, particularly among those drivers who aren’t named Hamilton, Verstappen, Bottas, Alonso, Raikkonen and Ricciardo, you are sadly mistaken.

Grosjean came to IndyCar after a mediocre F1 career and has had almost immediate success. Many of his former rivals—including those who have had minor to moderate success—are likely watching Grosjean’s success thus far, with a 10th-place finish in his series debut at Barber Motorsports Park to go along with his runner-up finish on Saturday.

And then there’s VeeKay, who felt his best chances for early success in his racing career—remember, he’s only 20 years old—was not in F1 but rather IndyCar. He went where opportunity beckoned the most, and after Saturday, it’s pretty clear he made the right decision.

VeeKay’s win was also the first for Ed Carpenter Racing in five seasons (2016), the last one being from Newgarden, who would go on to win two championships for Team Penske in 2017 and 2019.

But this wasn’t the only success VeeKay has had at Indianapolis. In his rookie effort around the world’s most famous race track, in last year’s Grand Prix, he started from the pole and finished third—his first career IndyCar podium. Now he has two podiums and, more importantly, his first IndyCar victory.

“We had an awesome start to the weekend, best start I’ve ever had,” VeeKay said to NBC. “I knew we had the car and we were so fast. Just a perfect day. It’s amazing. I don’t know what to say.

“It’s a dream come true, not just for me, but for the team, the family, everyone at home. I’m extremely grateful and extremely happy.”

Likewise for Grosjean, who really put things into perspective about why foreign drivers are increasingly turning their attention and ambition to IndyCar.

“My life (thus far in IndyCar) has been a great experience and people are really behind me and I can tell and I can feel it. The support has been incredible,” Grosjean told NBC. “You’ve only seen me smiling here in the U.S., and that’s why we are racing today.”

Grosjean will not be in the Indy 500, as he is running only road and street courses for Dale Coyne Racing, but there’s no question he’s flourishing already.

“P2 for a third race in IndyCar is not too bad,” he told NBC. “Leading races, that’s what I came for and that’s what we’ve done a bit today. The atmosphere of this country, discovering such an incredible place and the atmosphere between the drivers and so on, really, for now it’s been a full positive experience.”

Getting back to VeeKay, in a sense, Saturday’s win was revenge of sorts for him. He wrecked hard in his first practice at IMS back in early April. Fortunately, he only suffered a broken left index finger.

That same finger continues to heal and was still wrapped Saturday, but that didn’t stop him from raising it in celebration of finishing No. 1.

How many guys in F1 can say that?