Home » Racing » Palmer: 'Lando Norris proved he was a match for Lewis Hamilton'

Palmer: 'Lando Norris proved he was a match for Lewis Hamilton' 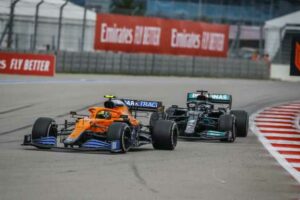 After taking pole position in qualifying at Sochi, the McLaren driver spent the majority of the race leading the pack, with Hamilton emerging as his biggest threat.

With just a handful of laps to go, his compatriot was around a second behind him, but it looked like he’d hold him off to claim his first victory in the sport.

That all changed when it started to rain, with Hamilton pitting for inters and Norris trying to stay out on slicks, which led to him eventually dropping down to P7.

Nevertheless, with how he performed when it was still dry, Palmer thinks the 21-year-old showed he’s a match for the seven-time World Champion.

“We all know how strong Hamilton is at driving in wet conditions – more often than not he ends up as the winner,” the former F1 driver said in his column for the official F1 website.

“That ended up being the case once more at a slippery Sochi, but it was only a result of Norris not pitting for the intermediate tyres.

“Like for like in the conditions, Norris proved he was a match for Hamilton in a battle of wits out front, which is enormously impressive from a driver seeking that first win.

“Clearly, it was the pit stop which made the difference, and between the top two, this was a team decision, rather than a driver decision, which won the race.”

The rain mixed up the order hugely, with Valtteri Bottas and Max Verstappen amongst those to climb the order while the likes of Charles Leclerc and Sergio Perez, like Norris, lost places.

Palmer says this is because those further back had less to lose and were never more willing to take risks by pitting early.

“Further back, other drivers took an early pit stop for the inters and benefitted,” he added.

“The likes of Valtteri Bottas and Kimi Raikkonen pitted first and gained, but these were drivers who were out of the points and had nothing to lose by gambling.

“Various other drivers pitted as well depending on how much they were struggling in the conditions and largely whether they were in a position to roll the dice or not.

“At the front though the decision was much harder. Norris and Hamilton were ticking along okay for a few laps as the track was getting wetter. Norris only lost three and then two seconds compared to Bottas on the Finn’s first couple of flying laps on intermediates. At this stage, the inters were quicker but not by enough to take a pit stop and gain overall.

“This explains the reluctance of the leaders to pit, as well as the likes of Fernando Alonso, Charles Leclerc and Sergio Perez, who were all performing well in the damp.”