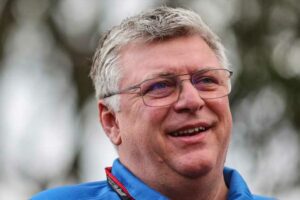 Alpine boss Otmar Szafnauer has jokingly suggested Sebastian Vettel’s crash during the Australian Grand Prix was revenge for the him swapping teams.

Szafnauer spent 12 years at the Aston Martin team through its various iterations but left at the end of last year, Vettel’s first with the team, to take up the reins at Alpine.

Even in the early stages of the 2022 campaign, it seems to have been a smart decision as Aston Martin are the sole team not to have registered a point while Alpine look to be capable of consistently challenging for a strong haul of points.

Luck was not on their side during the Australian Grand Prix and it was a particularly frustrating weekend for Fernando Alonso.

Having looked in the running for pole position before crashing in qualifying, the Spaniard’s weekend was made worse on the Sunday when his strategy to start on the hard tyre came undone by the Safety Car.

When Vettel crashed on the 23rd lap of the race, it allowed the drivers on the medium tyre to quickly swap thus causing Alonso to lose any advantage he might have hoped to gain.

Driver debrief in Melbourne. We move on to Imola.#AusGP pic.twitter.com/fjEqvWICPH

Szafnauer joked that the poor timing of Vettel’s crash was revenge for him swapping sides.

“They probably did it because I’m here now,” he said with a smile as reported by motorsport.com.

The 57-year-old also said the team’s weekend would have been very different had Alonso completed qualifying.

“If we had qualified where we could have qualified, it would have been a completely different race for Fernando,” he said.

“He would then have started on mediums like everyone else around him and would not have been caught flat-footed by the Safety Car.”

Szafnauer also joked that it is impossible to predict the future and if he could, he would in the casinos of Las Vegas.

He was asked about the comparison to Williams and Alex Albon who managed to make the hard tyre last for all but one lap of the race. However, Szafnauer did not think that was a realistic option for Alonso and Alpine.

“They [Williams] had no choice but to stay out,” he said.

“If Albon had pitted, he would have been at the end of the train, and you don’t do that.

“You were hoping for a red flag and you did the right thing.

“If we hadn’t had that pace, the Virtual Safety Car wouldn’t have come and if we had done the same as Albon, we would have finished 10th. We would have been ahead of them. But when you’re in front, you make different decisions.

“You can only make decisions based on the information you have at the moment. Predicting the future is very difficult. If I could do that, I would be in Las Vegas.”