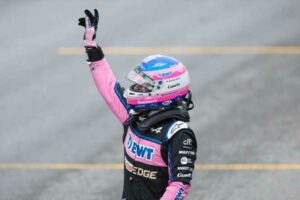 Alpine team boss Otmar Szafnauer hailed Fernando Alonso after the Spaniard produced arguably one of the performances of his career to earn P2 in qualifying.

The two-time World Champion excelled in the wet conditions and only Max Verstappen could claim to have been better than the 40-year-old.

It represents Alonso’s first top-two start since 2012 and his first in the top three since Brazil in 2013.

Speaking after the session, a delighted Szafnauer described it as the best qualifying performance of his time with Alpine and praised Alonso for his ability to adapt quickly.

“That was the best qualifying yet for me at Alpine. Absolutely brilliant,” Szafnauer told Sky Sports F1.

“We had good pace here all weekend, we had decent pace in Baku too so we keep working on the car, but for sure Fernando’s experience and skill shone through today and put it on the front row.

“He’s always been really, really good at adapting very quickly so he’s always on the pace very quickly and when you have changeable conditions that ability to adapt quickly shines through.”

Szafnauer was then asked by Jenson Button, who won in Montreal in similar conditions in 2011, if Alonso did it “for the old boys” and the Alpine boss agreed.

“It just shows that sometimes experience plays a bigger factor than the exuberance of youth. The older we get, the more we’d like to say that.”

Alonso was one of the last to cross the finish line during the session and Szafnauer revealed this was a deliberate ploy by the team in order to have a run on the track when it was at its driest.

“I don’t know if you saw but we waited quite a long time in the pitstop and you know, we had both of them [both drivers], we stacked them, so we planned to get both of them across the line as late as possible,” he said.

It was a successful afternoon for both Alpine drivers with Alonso’s team-mate Esteban Ocon ending the day in P7. Having used the dry track yesterday and the wet one today, the Alpine boss believes his team have gathered enough information to put in a good performance tomorrow.

“It looked good in the dry. They both did some long run long runs on the hard tyre. So we got some good information there and because of it I hope we’re well prepared for tomorrow.

“There’s some things that we can change which we will do overnight and other things we can’t so I think we struck a decent balance.

“I think we’ll do well around here. If I remember right, not a lot of people ran long runs, but we’re pretty decent. Fernando’s long run pace was up there with Ferrari’s if I remember right for Friday.”