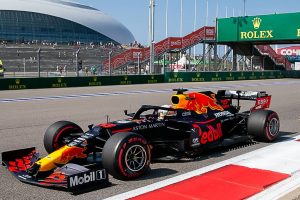 Max Verstappen produced what he described as “definitely one of my best laps in qualifying” to claim an unexpected P2 on the grid for the Russian Grand Prix.

The Dutchman had looked unlikely to separate the Mercedes duo during practice and Q1 and Q2 at Sochi, with Lewis Hamilton and Valtteri Bottas appearing all set to lock out the front row.

But although Hamilton was more than half a second ahead of everyone in Q3, Verstappen nailed a terrific final run in his Red Bull to get himself ahead of Bottas – and spark the mouthwatering prospect of a fight with the World Champion off the start line.

“It was definitely one of my best laps in qualifying,” said Verstappen. “It felt like a really good lap. In the end, to be second on the grid, I didn’t expect [it], so very pleased for that. I’m a little bit surprised. Even throughout qualifying I didn’t think it was possible.

“We were struggling a bit to find the right balance with the car yesterday on this track, it’s a bit slippery around here. Even this morning I wasn’t entirely happy, but in qualifying we were trying to nail it and we managed to stabilise the car a bit more.

“I think we extracted more than what we thought was possible and I think we can be very happy with that.”

Tomorrow should be interesting strategy wise, this weekend is far from over #KeepPushing pic.twitter.com/y9kAAudgrK

Despite being on the ‘wrong’ side of the grid, Verstappen thinks he may have a chance of getting ahead of Hamilton if he can get a tow – something which the Briton himself admitted was likely to happen.

Also potentially to Verstappen’s advantage is that he will be starting on medium tyres whereas Hamilton is on softs, which could give Red Bull an edge regarding strategy.

“If I can have a decent start, the tow effect is very big around here. There’s a good draught,” said Verstappen. “Who knows what can happen into Turn 2, and it’s going to be very interesting with these tyres.

“Overall, Mercedes have more pace so it will be hard to beat them. Of course I’m also on the dirty side of the track, which is a bit of a difference here, normally other tracks it doesn’t make a big difference. But of course here not many cars run, so let’s see.”