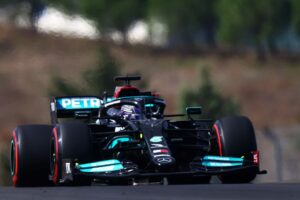 In Russia, it was Max Verstappen who took an engine penalty, and in Turkey this weekend it will be Lewis Hamilton’s turn to take the hit.

Under Formula 1 regulations drivers are only permitted three versions of the six components that make up the power unit. Their respective Red Bull and Mercedes teammates—Sergio Perez and Valtteri Bottas—took penalties in the Netherlands and Italy, signalling that the title protagonists were also likely to exceed their allocation.

Verstappen took a fourth power unit at the previous round in Russia, starting from the back of the grid, from where he surged through to second spot.

Now it’s Hamilton who faces a demotion, though it is not quite severe. Mercedes has equipped his W12 with a fresh Internal Combustion Engine, but as it is only one component, rather than the whole unit, Hamilton’s demotion is 10 places instead of a complete relegation to the back of the grid. Nevertheless, it leaves Hamilton facing a recovery job. He is likely to start at best 11th. The title fight is finely balanced, with Hamilton just two points clear of Verstappen, and seven of the 22 rounds still to go.

Hamilton still started the 16th round of the season in strong form. At a grippy Istanbul Park, in comparison to the borderline ice rink that Formula 1 encountered upon its 2020 return to the venue, Hamilton set a new track record en route to topping both Friday practice sessions. It is also a track at which overtaking opportunities are plentiful, while the high-speed turns could push teams to making multiple pit stops due to tire degradation, potentially opening variable strategic avenues. There remains an outside risk of showers interfering during qualifying and the race.

“We’re fairly close to the maximum we can extract from the package but we always find something overnight, so we’ll be working hard to take our pace into tomorrow,” said Hamilton. “I have a lot of work to do on Sunday and I need to just focus on getting the best out of tomorrow, obviously aiming for pole to limit the loss of the penalty.”

Hamilton’s sanction opens the door for Verstappen to take the initiative, though he had a slightly subdued Friday, classifying only fifth.

“It looks like we have a lot to go through this evening because today wasn’t the best of days,” said Verstappen. “We tried a few different things going from FP1 to FP2 but we’re still looking around for improvements. Of course, Lewis is taking a penalty on Sunday but we have to focus on ourselves, hopefully we can make improvements before qualifying tomorrow as we have some challenges, we’ll see what we can do.”

Elsewhere Alfa Romeo is set to finalize its 2022 driver lineup in the next couple of weeks, with Chinese Formula 2 front-runner Guanyu Zhou the leading candidate to partner Bottas.

• Meanwhile government officials in the Emilia Romagna region of Italy say they have formalized an economic package to welcome Formula 1 back to Imola on a four-year deal.

Imola re-joined the calendar in the pandemic-hit 2020 season and also featured in 2021 as a replacement round. If an agreement is ratified with F1 it would leave two rounds in Italy, with Monza contracted through 2025. A 23-round 2022 calendar is expected to be presented next week, featuring a mid-November finish, in order to avoid overlapping with the soccer World Cup.