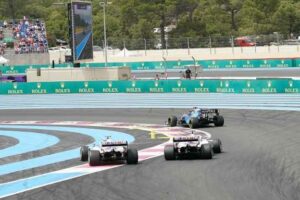 For the second consecutive race, Mick Schumacher was angered by an aggressive manoeuvre from his team-mate Nikita Mazepin during the French Grand Prix.

In Azerbaijan two weeks ago, the incident occurred on the run to the chequered flag when Mazepin jinked to the right in a defensive move as his Haas colleague was executing an overtake.

The Moscow-born driver claimed it had been a misunderstanding because he had expected Schumacher to try and pass him on the left.

At Paul Ricard, the duo clashed only five laps into the race. Mazepin went for a move up Schumacher’s inside at Turn 3 and ran the German out of room at the apex of Turn 4, forcing him to take to the run-off area to avoid contact.

Although Schumacher had stopped short of verbally criticising Mazepin publicly in Baku, limiting his emotions to an angry gesture from the cockpit, this time he spoke out.

“It doesn’t have to be [like that],” Schumacher told German reporters after the race, in which he finished 19th – one place ahead of Mazepin as all 20 drivers ran until the end.

“I think I have to talk to the team about it again. If that’s how it’s going to be in the end, then it’s like that.

“We do our thing, he does his. Most people can explain to themselves that it doesn’t have to be like that. At this level, I can’t quite understand it.”

Relations between the two Haas rookies have been deteriorating over the last few races – a point acknowledged by Schumacher’s uncle, ex-F1 racer and now German TV pundit, Ralf.

“The two of them won’t go on vacation together,” said the former Williams, Jordan and Toyota driver.

“I have to say the only excuse I have is that Nikita is absolutely overwhelmed.

“He drives in too fast and doesn’t leave any space. Thank goodness nothing happened because Mick looked in the mirror, otherwise both would have been out.

“At some point the team boss has to say something, even if Dad [Dmitry Mazepin] pays the biggest bill.”

Mick Schumacher had a decidedly mixed weekend because the pleasure of reaching Q2 for the first time dissipated when he was unable to take part in that session after crashing late in Q1 – and he then finished four places lower than his starting position of P15.

“Looking overall, I think we had a very decent weekend,” said the 22-year-old. “We knew the race would be difficult – I was optimistic because I think that’s important.