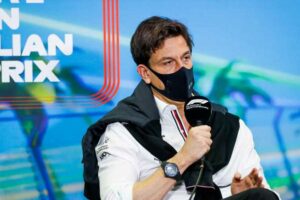 Former Mercedes driver Nico Rosberg has suggested his old boss Toto Wolff was annoyed with Lewis Hamilton after his early exit from qualifying at the Emilia Romagna Grand Prix.

It was a tough qualifying for Mercedes with both drivers being knocked out in Q2. Upon returning to the pits, Hamilton and Wolff were seen sharing a heated discussion in the garage.

Wolff has since dismissed that, explaining Hamilton and himself were “venting” at each other about the team’s current situation.

Rosberg has suggested there may have been more to it, however, offering his own theories on what could have been discussed.

“If I have to speculate now, it looked to me that Toto was annoyed about something Lewis had done, which might be understandable,” Rosberg told Sky F1.

“Lewis could have been very frustrated on the internal Mercedes garage radio or something, complaining to them that they didn’t follow his thoughts on what they should have done with strategy or complaining about the car or something.

“Lewis also got out of the car before [Q2] was over and there might be still a one per cent chance the track could be in a good shape towards the end of qualifying. Maybe Toto was angry about that.

“It just shows the stress is starting to get to them within there, because rather than going forward at the moment they are actually going backwards. I mean, they were almost two seconds a lap slower yesterday in qualifying – their worst qualifying in 10 years – so naturally… the tension is going to build internally.”

Mercedes have work to do in 2022, with rivals Ferrari and Red Bull clearly ahead – a fact compounded at the Emilia Romagna Grand Prix where the team endured their worst qualifying session since the 2012 Japanese Grand Prix.

Hamilton could only manage 13th place, with his team-mate George Russell missing out on a spot in Q3 by half a second.

Things did not get much better in the sprint with Russell finishing where he started in 11th, but Hamilton actually losing a place and finishing down in 14th.

Rosberg, who won the title with Mercedes in 2016, believes Wolff is the cream of the crop of team principals in Formula 1, saying his ability to motivate people is his key strength.

“Toto is obviously one of the best team leaders we’ve ever seen in the sport,” said Rosberg. “He’s very strong in keeping people together and motivated. Of course he will have outbursts of angriness, as we’ve maybe seen, but I still believe he’s the right guy to keep such a team going in such a difficult situation.

“[But] I can guarantee you nobody in Mercedes enjoys being two seconds off the pace and being out in Q2 with not a single chance to be somewhere at the front – definitely nobody likes that. That’s quite a horrible situation to be in for them, who are so used to success.