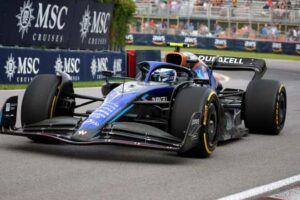 Nicholas Latifi won’t get to try out the new Williams updates for a while, as Alex Albon will field the updated car.

Williams are rolling out a significant update to their FW44 for this weekend’s race at Silverstone, albeit only on Alex Albon’s car. This is due to the team not being in a position to roll out two sets of updates just yet, which is understood to be quite a significant package.

Latifi explained that he’s hopeful the performance difference between the two cars is quite marked, even if it does mean him being left trailing by Albon.

“I guess time will tell – we’ll find out more on Saturday and Sunday, to be honest,” he told media, when asked about the extent of the updates and the performance it may bring to the team.

“It’s probably a bit early to really put a proper number to it.

“We’ve been given a very broad range and potential time so we just really have to see what it’s going to bring. I mean, it is a sizable difference. Visually, the two cars will look different.

“Even though it’s not on my car, I’m hopeful that it’s going to be quite a big difference. I think, in a few races, I’m supposed to get it.

“It won’t be the next race either, which is obviously a little bit frustrating from a driving side of things, but I’m going to be watching with a keen eye to see what it brings to the other car and hopefully, there’s a relative closure performance to the next gap of cars because I know there are a few other cars here as well bringing some upgrades so we’ll have to wait and see.”

As for why Albon is being given the updates, and why he’ll be left waiting, Latifi admitted it’s due to Albon having a stronger first half of the season.

“[It’s] a fairly standard thing when the upgrade is available only for one car so I’m not surprised that the upgrades are on his car.

“From my side, I would have liked there to be two sets of upgrades especially as it’s obviously the car’s first upgrade of the season.

“From where we started, it’s obviously quite a long time because it was clear we were not where we wanted to be performance-wise. So we were just patiently waiting. It would have been nice to have two sets, but yeah, just got to be a bit more patient on my side.”

Albon himself spoke about the updates that he’ll be running this weekend, praising the Williams team for getting it ready in quite a short period of time.

“Well, the upgrade itself is exciting,” he told Sky F1.

“Obviously, we have quite a visibly different update that we have this weekend coming. It will actually be hard for us to truly understand that if it’s raining because we won’t really be able to have a true back-to-back.

“I think the reason why we have one car is partly down to getting it here on time. I think it was pretty last minute, and the guys did an amazing job to get it ready.

“But it also offers a good comparison between the two cars. We are generally interested, as it is so different – the philosophy itself is different. We do need to see where it comes out. On simulation tools, everything is better but by how much and in what ways we don’t really know, so let’s wait and see.”

Pointed out to him that the updates are understood to be very similar to the concept Red Bull have used with their RB18, Albon laughed.

“All the teams copy the best teams, but we have our own one!”