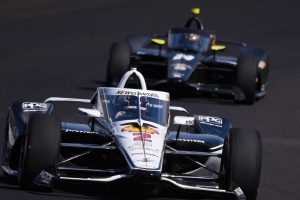 If the first full-field test session at the Indianapolis Motor Speedway is any indication, it’s been a good offseason for some of the big names on the NTT IndyCar Series grid.

Team Penske’s Josef Newgarden was quickest in a Friday test session that attracted 31 Indianapolis 500 hopefuls. Newgarden’s top speed was 226.819 mph. The only other two drivers to top 226 were a pair of two-time Indy 500 winners in defending champion Takuma Sato and Juan Pablo Montoya.

Scott Dixon, the defending series champion who is going for a record-tying seventh IndyCar championship, was fourth quickest. Graham Rahal rounded out the top five. 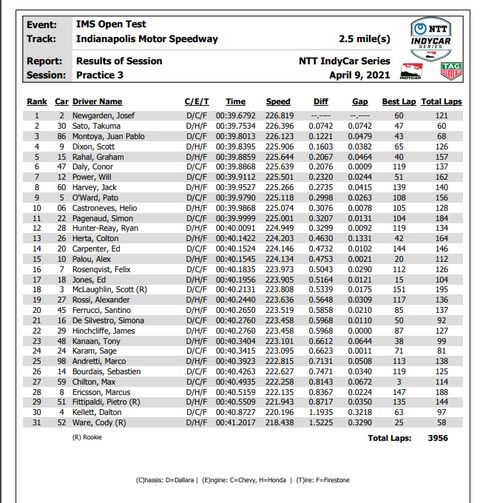 While Sato is back with Rahal Letterman Lanigan Racing this season, Arrow McLaren SP’s Montoya is just plain back. Montoya’s last Indy 500 was 2017. The 45-year-old Montoya’s past wins in the 500 were in 2015 and way back in 2000.

A lot has changed on the cars, and Montoya said that the welcome back to an Indy car at the Speedway was a warm one. Literally. This was Montoya’s first time in an IndyCar in a full test session at IMS in a car equipped with the aeroscreen safety device.

“It wasn’t too bad to get used to it,” Montoya said. “I thought it would be a little more intrusive. It’s definitely a pain in the butt to get in and out of the car, and it’s a lot hotter. I know like here it hasn’t been that bad in the oval. I did a test in Laguna. In a road course, you don’t get a lot of air. That was kind of shocking.

“Yeah, I mean, it’s kind of weird because, like, you’re really in a little bubble. It feels a little bit once you’re driving like a sports car. But you’re with a closed visor, I still don’t get why you have to run—I don’t think you have to. I think you probably do, but I’m used to sports cars. Same thing you’re with the visor open so you get a little more air.”

Still, Montoya had no real complaints.

“It’s good. It’s fine,” Montoya said. “I think from the safety point of view, it’s a great thing. It’s a matter of getting used to it more than anything else.”

As for Newgarden, he’s on a mission to check one of the few boxes still left on his racing bucket list. He’s yet to win the 500. He was in the hunt in each of the last two years, finishing fifth a year ago after a fourth-place finish in 2019.

“Yeah, it was a pretty good day,” Newgarden said. “I was happy enough with the car. I think we still need some work, for sure. But just to get an initial read on where we’re at, obviously there’s a lot of new parts, differences to the last couple years. So we’re just trying to assess what we need to really work on now these last couple weeks before we get back here in May.

“Pretty happy. I felt the Shell Fuel Rewards car looked good. Had some decent speed, which is always nice to see, but doesn’t mean much when it comes to race day. We’ll see how we shake out as we get to the meat of things in the month of May.”