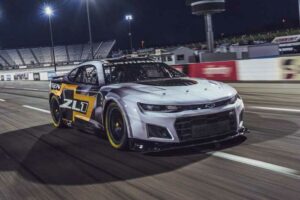 Since the debut of the Strictly Stock division in 1948, the cars turning laps at the highest level have undergone numerous changes since first taking to the beach at Daytona. Moving away from showroom models to a specifically constructed high-tech platform, two things have remained consistent: Win on Sunday and sell on Monday.

• Cars in the first era of NASCAR were nearly identical to the on-street models.
• Cars were strictly stock, as no modifications were allowed to body or frame.
• This was the only generation of NASCAR cars to have actual doors.

• This generation of NASCAR cars was designed to handle the series’ new superspeedways.
• Three different companies built and designed chassis as NASCAR moved away from a strictly stock model.
• Teams were allowed to adjust the chassis, but the frame was to remain stock.

• About the only things on these cars that resembled showroom models were the bumpers, nose, and tail.
• Steel bodies were replaced by fiberglass to reduce weight.
• Wind tunnels became a staple as teams worked to gain aerodynamic advantages.

• Also called the “Car of Tomorrow”.
• Car was designed with a front splitter and an almost V8 Supercar-esque rear wing.
• This car produced the greatest safety gains in the history of the sport.

• NASCAR’s sixth-generation cars were designed to look more like their showroom counterparts.
• The chassis beneath the shell was largely spec.
• These cars were increasingly bulkier, faster and tougher, relying on maximum aerodynamic grip.

• Seventh-generation cars patterned after Australian Supercars, GT3 racers.
• Manufacturers allowed to shape the race cars’ bodies to better represent their brands.
• The engines are unchanged and will still be limited to 358 cubic inches and 550 horsepower for restrictor-plate racing and 670 hp for all other tracks.

What is now widely considered as Generation 1 debuted with the sanctioning body in 1948 and resembled nearly identically the on-street counterparts. NASCAR saw countless manufacturers participate from Chevrolet to Chrysler, Volkswagen and even Jaguar.

Three items were mandatory: Each car needed to have a strictly stock body and frame. This means that essentially, when a driver purchases a car from the dealer, no modifications could be made to the car’s body and frame. It was to be left as is.

This was the only generation of NASCAR race cars to have actual doors. Given they were customized street cars, the doors were a massive issue for driver safety. NASCAR eventually mandated that the doors be bolted or welded shut—providing the genesis of entering through the window.

The third and final permitted modification was the use of heavy-duty rear axles, which were intended to prevent rollovers. Aside from these three outlined modifications, nothing else was permitted to be done to the car. The Strictly Stock cars were used until 1966 when NASCAR ordered its first significant competition change to the Grand National Division.

The year is 1967 and new superspeedways are being conceived and constructed—and NASCAR needs a new generation of car to meet it.

In a departure from the “anything goes as long as it’s stock” approach from previous years, NASCAR sought increased parity with its new rules package. While the win on Sunday, sell on Monday approach was still a driving factor, NASCAR permitted teams to be more liberal with the modifications made to the frame. The teams were allowed to adjust the chassis but the body was to remain stock. The cars no longer featured doors, but still closely resembled the on-the-road counterpart. Richard Petty’s 1973 Dodge Charger looked almost identical to one that a customer could have purchased at a local Dodge dealer.

Three companies were contracted to build and design chassis for NASCAR—Holman-Moody, Banjo Matthews, and Hutchensen-Pagan. This started NASCAR’s move away from stock cars and toward specially designed race cars. This was ever more apparent when the 1980s came around.

By 1981, gone were the days of a car being showroom-to-track, as these custom-built cars only vaguely resembled their off-track counterparts. The cars became smaller, which NASCAR claimed was to help the showroom equivalence, but they were generally very different.

The changes made the cars faster and more aerodynamically sound. Again, there were no doors to be seen, bigger spoilers, and a more streamlined design as well as manufacturer support from GM, Ford, and Chrysler, with teams having access to six different brands. The heavy support from the three parent companies meant teams to could still buy body panels and other parts directly from the manufacturers.

The cars also used a 110-inch wheelbase, which was a significant reduction from previous years. This generation had the shortest lifespan to date, lasting just a single decade—and the ‘90s introduced a completely different game.

In 1991, NASCAR debuted what is now considered its most iconic generation of platforms. These cars featured completely modified bodies and looked almost nothing like their street counterparts. Aside from the vague shape and decals, it was clear these weren’t street cars but track specific race cars.

This is when teams first began utilizing wind tunnels to begin optimizing aerodynamics as aero grip began to outpace its mechanical counterpart.

The bodies changed as well with steel bodies being phased out by fiberglass. This reduced the weight of the car and gave it an even greater weight-to-power ratio. While the parts kind of resembled the showroom models, many teams used these features as merely cosmetic. This extended to the bumpers, nose, and tail of the car.

The Gen-4 era saw the departure of three GM brands—Buick in 1992, Oldsmobile in 1994, and Pontiac in 2004. It also saw the return of Dodge in 2001 and the debut of the first Asian manufacturer in Toyota in 2007. NASCAR regulations still required the showroom equivalents be built in the United States with Toyota plants located in California, Texas, and Kentucky.

The Gen 4’s last season of full-time competition was 2006, but its shared the 2007 season with the next-generation’s car—the infamous Car of Tomorrow.

The Car of Tomorrow was a complete departure from everything that came before it. Designed with a front splitter and an almost V8 Supercar-esque rear wing, the COT was visually new territory for the Cup Series.

The splitter and wing could be adjusted in the name of competition, but the splitter proved nimble when introduced to infield grass. The bodies were all identical, providing no manufacturer relevance whatsoever, a point of contention to Chevrolet, Dodge, Ford, and Toyota during its lifespan.

This car did produce the greatest safety gains in the history of the sport. The COT was a variable tank of a platform, evident by a 2008 crash at Texas Motor Speedway when Michael McDowell struck the wall at nearly 200 mph and barrel rolled down the straightaway. After 10 rollovers, McDowell climbed out without injury. Violent incidents involving Carl Edwards, Ryan Newman, Kyle Busch, and Kasey Kahne also provided a testament to its safety.

The rear wing was met with so much fan vitriol that it was replaced with a spoiler halfway through 2010, and the splitter was reduced in the hopes to minimizing terminal damage from the slightest of contact. Dodge departed the sport after winning the 2012 championship with Brad Keselowski as very few teams had signed with the OEM for the Gen-6 era.

Chevrolet, Ford, and Toyota unveiled the now current generation of NASCAR machines. The Gen 6 featured the return of manufacturer identity with individual bodies designed to reflect showroom counterparts. The chassis beneath the shell was largely spec and featured very little competitive wiggle room.

These cars were increasingly bulkier, faster, and tougher, relying on maximum aerodynamic grip to make speed at every type of racetrack. The on-track action on some of the biggest tracks took a hit during this era, but the real competition was found in the shop. The cat-and-mouse game between the sanctioning body and teams had never been more intense.

NASCAR routinely hired some of the best veteran crew chiefs to serve as competition directors during this era and eventually introduced a state-of-the-art laser light inspection station to do what traditional templates were unable during the first half-decade of its tenure.

This car will be used through the duration of the 2021 season and will be replaced by a new generation of spec car in 2022—currently christened the Next-Gen.

The seventh generation of NASCAR Cup Series car will debut in 2022 under the Next-Gen moniker. While every generation of car represented an advancement in technology, safety, or aesthetics in some notable way, there has never been a leap in evolution like the one under the upcoming platform.

For the first time ever, Cup Series cars will be largely spec, with teams needing to purchase parts and components from official vendors instead of an open market or within their own shops. Cars will largely become kits that need to be constructed rather than developed. This has been done in the name of cost containment and competitive parity.

The only things that will be different from car-to-car is the engine inside and the body outside. Chevrolet, Ford, and Toyota have each created individual body styles that are the closest representation to stock cars since NASCAR stopped using production models in the 1980s.

Initially, the platform will use the current generation ICE V8 engine formula but will eventually adapt an electric or hybrid counterpart over the next decade.

The car is evolutionary in the sense that it finally modernizes standards that had been in place since the 1960s. The Next-Gen will utilize and independent rear suspension, 18-inch wheels, and a center-lock lug nut with lower profile tires. It makes use of a five-speed (plus reverse) sequential transmission in transaxle. The greenhouse is reflective of the showroom counterparts. The entire package has been designed to encourage additional OEMs to join Chevrolet, Ford, and Toyota, and the platform designed to accommodate a wide variety of manufacturers, while bridging the competitive gap between the mega teams and those traditionally running midfield or worse, while also lowering the barrier of entry.