NASCAR Could Go Hybrid in 2024 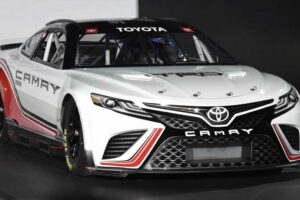 The car industry is changing in favor of sustainability, and motorsport is along for the ride. F1 went hybrid nearly a decade ago and sustainable fuels are on the way for the series as well. NASCAR has lagged with its naturally aspirated V8s still dominating the scene, though that’s apparently set to change in 2024.

According to Fox Sports NASCAR reporter Bob Pockrass, the sanctioning body’s president Steve Phelps says that hybridization is coming soon. At the SportsBusiness Journal World Congress of Sports, Phelps reportedly let slip that “some type of hybrid engine system with an electrification component” is likely coming by 2024.

Now, this news isn’t coming out of nowhere, and indeed changes in NASCAR’s track lineup are likely happening to support this powertrain switch. Oval races, for instance, are not conducive to a hybrid system since there aren’t any real braking opportunities. Slowing down is necessary to utilize a hybrid system’s full potential. As such, more road courses with corners that go left and right are likely to be added to future race calendars. Giving credence to this notion, Phelps reportedly also claims that it is important to have schedule variation, and changes are coming for the 2023 season, according to Pockrass.

It was previously believed that NASCAR could go hybrid as soon as 2022, although that was pushed back by the pandemic. Back in 2019, NASCAR Senior Vice President for Racing Development John Probst gave a few details of what the system might look like. It’s clear that braking opportunities are key to making it work, but how the power is actually used is still up for debate. “Braking is typically used as a mechanism to get the power back into the batteries,” he said. “As far as when you actually apply the power. I think that that’s what we need to study…and work through with our OEMs on how it’s deployed.”

The system could be anything from a “push to pass” arrangement, somewhat similar to DRS in Formula 1, or something more nuanced than that. No details about how this electric power might be delivered have been revealed by NASCAR, although every team will surely receive the same sort of system when it’s eventually rolled out.

This announcement is finally happening because of NASCAR’s transition to the Next Gen Cup car. The new vehicle features 21st-century upgrades like independent rear suspension, a sequential six-speed transmission, and composite bodywork. Now that this change is finally taking place, new technology can be developed for use on the modern platform. Let’s hope the addition of hybrid power makes NASCAR even better to watch, and at least a little more relevant to the cars we see on the road.