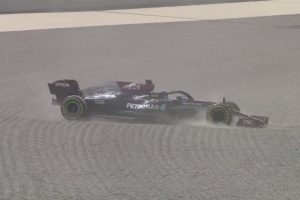 The Silver Arrows quickly found themselves on the back foot as pre-season testing got underway at the Bahrain International Circuit on Friday.

With just three full days of track time available, Valtteri Bottas was only able to complete six timed laps in a four-hour session after the W12 experienced an “out of nowhere” gearbox issue which prompted a new one to be fitted.

Lewis Hamilton did not look particularly comfortable when he took over driving duties on Friday afternoon and the same can be said when he returned to action on Saturday morning, too.

Although Hamilton was able to add 35 laps to the 42 he managed on Friday, he caused the session to be red flagged after spinning out of control at Turn 13. The blustery conditions had also caused problems for the likes of Nicholas Latifi and Carlos Sainz just moments before his off.

The W12 became beached in the sand trap and needed the recovery vehicle to take the car back to the Mercedes garage.

Hamilton, meanwhile, after catching a lift from the Race Control car, went straight through to the garage and to the paddock area with helmet still firmly on.

He would then return to the car for the final hour of the morning session.

That is not the only cause for concern at Mercedes, as another car they power, the Aston Martin AMR21, has also experienced gearbox issues and restricted Sebastian Vettel to just six laps on Saturday morning,

Mercedes engineering director, Andrew Shovlin, admitted after Friday’s session that the Silver Arrows are already quite a way behind on their schedule.

“It’s been a poor start to the season from us,” said Shovlin.

“We lost more or less the whole morning with Valtteri with a gearbox problem and our workload over lunch meant we were late joining the afternoon session with Lewis.

“Once we got running it was clear we didn’t have the car in the right balance window and while we made some progress during the day, we’re not happy with how the car is performing and it’s pretty clear we have some work to do.

“We’re quite a way behind on our test programme and need to find a bit of balance and speed but we have two days left and every opportunity to recover the situation.”