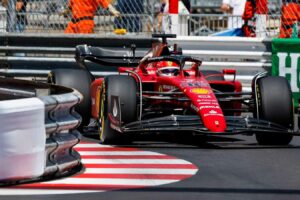 Charles Leclerc went fastest in FP2 for the Monaco Grand Prix on Friday, lapping just four hundredths faster than team-mate Carlos Sainz in what appeared to be an encouraging session for the Scuderia.

Both Ferrari drivers held a healthy gap to the Red Bull pair of Sergio Perez and Max Verstappen, with the former going 0.379s slower than Leclerc in their qualifying simulations.

McLaren’s Lando Norris repeated his FP1 result by rounding out the top five, but team-mate Daniel Ricciardo had an abrupt exit from the session, crashing out after losing control of his car in the Swimming Pool section of the circuit, under a quick direction change.

FP1 was largely a scouting mission for the drivers as they built up their confidence to attack the tight, demanding Monaco layout – but FP2 would be the first acid test for how their qualifying pace could be on Saturday.

The majority of the drivers came straight out on track to get more laps under their belts – understandable, with Monaco being widely known as having the least forgiving layout on the calendar.

One man in desperate need of track time was Valtteri Bottas, who was unable to set a flying lap in FP1 after the team discovered an issue that meant they needed to remove his power unit and investigate.

This remained the case in the first part of second practice, but the Finn was finally able to emerge around 10 minutes in – at which time both Red Bulls were top of the timesheets, Perez on a 1:14.001 leading the way, two-and-a-half tenths ahead of Verstappen behind.

But the Aston Martin mechanics will have been wincing at the sight of Sebastian Vettel losing grip out of the first part of the Swimming Pool section.

The German lost the rear of his car going through the left-right flick and missed the wall on the outside by mere millimetres.

But moments later, the red flag was out as Daniel Ricciardo was not quite so lucky through the same section of the circuit. The rear of his McLaren lost grip as he flicked his car to the right, with the MCL36 bottoming out as it changed direction.

Ricciardo was then left helpless as he slid into the Tecpro barrier – causing significant damage to his car in the process.

With 10 minutes lost, it’s unsurprising that a queue formed at the end of the pit lane as the remaining drivers were itching to get back out on track.

Soft tyres were bolted on as the drivers wound up for their qualifying simulations, and Ferrari and Red Bull underlined their superiority as Leclerc clocked a 1:13.125 on his flying run, 0.199s ahead of Perez in P2.

While Verstappen improved his time, Leclerc improved further to become the first person to dip below the 1:13 mark, with a 1:12.656 coming on his third qualifying sim, backing up his speed that put him top of first practice earlier in the day.

Mercedes and Lewis Hamilton in particular had struggled with bouncing in FP1, and things didn’t appear as though they had improved too much for the Briton on his qualifying simulations.

He was over eight tenths behind George Russell’s quickest effort, and Hamilton suffered a big lock-up heading into the downhill right-hander of Mirabeau, flat-spotting his front tyres as he took to the escape road to avoid the barriers.

As ever, long-run simulations took over for the final quarter-hour of running as the drivers and teams sampled Monaco in likely race trim as the sun shone over Monte Carlo.

But the Ferrari pair looked to have the edge at the front on one-lap pace, with Leclerc and Sainz almost four tenths faster than both Red Bulls at the end of the session.

On this evidence, the Scuderia are likely favourites for pole position, unless Red Bull can find improvements in FP3 on Saturday.