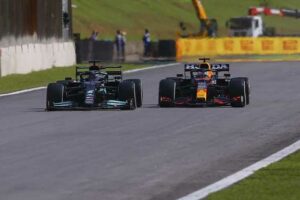 On lap 48 of the Sao Paulo Grand Prix, Hamilton attempted to overtake Verstappen around the outside of Turn 4, but found himself off the track with Verstappen, on the inside, pushing both cars extremely wide and into the run-off area.

At the time, the stewards noted the incident but then quickly came to the decision that no investigation was necessary.

Later, Hamilton would eventually make the move stick on Verstappen at the same corner and go on to win the race, narrowing the gap to 14 points behind the Red Bull driver at the top of the Drivers’ Championship.

News emerged after the epic battle that the FIA did not have the on-board footage from Max Verstappen’s car to further assess whether an investigation was needed or not.

Two days after the race, the missing footage has miraculously been found with Formula 1 posted an ‘all the angles’ video of Lewis v Max on their website.

Mercedes boss Toto Wolff called the decision not to penalise Max Verstappen as “laughable”, while Red Bull’s team principal Christian Horner said the incident should form part of the “let them race” mentality.

Asked in the post-race press conference about the incident, Verstappen said his worn tyres were to blame in running wide at the corner.

Asked by Motorsport.com for viewpoint, Verstappen said: “We both, of course, tried to be ahead into the corner and so I braked a bit later to try and keep the position.

“The tyres were already a bit worn, so I was really on the edge of grip. That’s why I think I was already not fully on the apex, so then it’s a safer way of just running a bit wide there.

“In a way I was, of course, happy that the stewards decided that we could just keep on racing because I think the racing in general was really good.”