Misano MotoGP: Vinales tops first practice by half a second 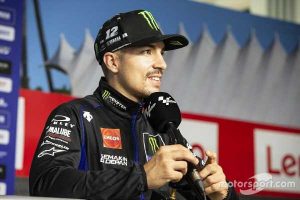 Yamaha’s Maverick Vinales dominated the opening practice for the MotoGP San Marino Grand Prix, while there were technical issues for Ducati’s Andrea Dovizioso.

The first of two races at Misano takes place on a newly resurfaced track, with Vinales’ best of 1m32.198s already just over half a second away from the best ever lap set back in 2018.

The San Marino GP is also the first to welcome fans in 2020, with a modest, socially-distanced crowd enjoying MotoGP action on Friday morning.

KTM’s Pol Espargaro set the early pace with a 1m34.115s, having been one of a handful of current race riders to have tested on the new Misano surface in June.

His time was bettered five minutes later by Petronas’s Fabio Quartararo, with the Yamaha rider – at the scene of his first duel for victory with Marc Marquez last year – going top with a 1m34.039s.

This was short-lived, however, as Espargaro returned to the top of the standings with a 1m33.607s, before Vinales on the works team Yamaha improved to a 1m33.479s.

With just under 25 minutes to go, Quartararo went top again with a 1m33.435s, which stood as the benchmark through to the closing stages of FP1.

The middle of the session proved tricky 2018 Misano race winner Dovizioso, with several attempts to come out on track aborted due to an issue with his factory Ducati.

Unable to fix the problem, Ducati sent Dovizioso out on his second bike in the latter stages and leaped up from outside of the top 20 to ninth.

With two minutes to go, Vinales began lighting up the timing screens again having unusually fitted a fresh hard rear tyre, and went top with a 1m32.760s.

Unlike its rival manufacturers, Yamaha never tested at Misano in June with Jorge Lorenzo – something Quartararo questioned on Thursday when asked about it.

Aprilia’s Aleix Espargaro tracked Vinales late on and jumped up to third as a result with a 1m32.949s ahead of top Ducati runner Johann Zarco on the year-old Avintia GP19 and the sister Aprilia of Bradley Smith.

Valentino Rossi was shuffled out of the top 10 late on for the first session of his home race, with Franco Morbidelli (Petronas), KTM’s Brad Binder and Dovizioso following.

Alex Rins was a low-key 16th on his Suzuki, while Styrian GP winner Miguel Oliveira was a mystifying 2.4s off the pace in 22nd and last in the first session.