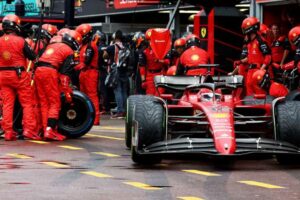 Hakkinen believes that the decisions of the Ferrari pitwall were the main contributing factor behind the team losing the Monaco Grand Prix, after leading first and second in the early stages of the race.

Everything had looked nailed on for a Ferrari victory due to the importance of track position in Monte Carlo, only for a poor tyre strategy call that resulted in them only managing second and fourth place – Leclerc finishing off the podium after starting from pole position.

An aggressive overcut strategy from Red Bull saw them climb from the second row to claim victory with Sergio Perez, while Max Verstappen finished third.

“In the race, Ferrari hesitated at the key moment, calling Charles in [on Lap 18], then pitting him again [on Lap 21] and also leaving Carlos out longer than was necessary,” Hakkinen wrote in his weekly column for Unibet.

“Red Bull got the strategy right, jumping their cars from third and fourth up to first and third.

“I know Ferrari have said they are going to analyse the reasons why their strategy went so badly wrong, but I think the technical analysis will be less important than the human factors.

“What makes one team have the confidence to make the right call, and another team to hesitate and get it wrong? That’s down to people and the confidence which they have in each other when under pressure.”

Hakkinen singled out Red Bull’s Sergio Perez for praise, with the Mexican’s victory emulating Hakkinen’s win on the streets back in his first championship year in 1998.

“Winning in Monaco is a very special experience for any driver and [Checo] Perez has really done something special,” said the Finn.

“He drove brilliantly all weekend. He made a small mistake hitting the barrier at the end of qualifying and that definitely played a part in setting up the race as it delayed Max while he was on a qualifying run.

“However, Checo was quick on Friday and fastest in final practice so it was clear that the car was working well for him.”

Hakkinen also spoke about the possible removal of Monaco from the F1 calendar, with the jewel in the crown of the sport losing its lustre as F1 looks to new territories. Monaco currently doesn’t have a deal for the 2023 season, but Hakkinen said a long-term deal should be in place.

“Monaco has been holding Grands Prix since 1929 and is a very special race which should remain on the calendar in the long term,” Hakkinen said.

“It is a very good test for the driver because of the precision needed. One small mistake and you are out.

“On many of the modern circuits you can drive off the track and there is no problem – you can just come back on again! Monaco punishes mistakes.

“F1 has, of course, developed a lot in recent years with many new circuits and countries joining the World Championship, but it is important to protect the heritage of our sport.

“Monaco has always developed too, so I hope that together F1 and Monaco will have a very bright future. Each is good for the other.”