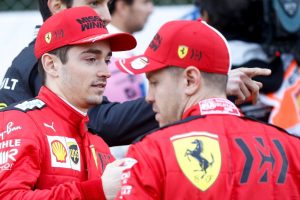 Two-time World Champion Mika Hakkinen doesn’t think Ferrari are on the same level as Mercedes or Red Bull in 2020.

While Mercedes and Red Bull have been widely pitched as the leading teams heading into the 2020 season, Ferrari are somewhat of an unknown.

Their pace in pre-season was poor, whereas in previous years they have been dominant, and the team themselves have played down their title chances.

And while Hakkinen does think the Scuderia will be around the top positions, it seems he doesn’t see Ferrari making it a three-team battle for the World Championship.

“The best performance earlier this year in testing was Mercedes and Red Bull,” he told Laureus.

The Finn made it clear that there will be no margin for error in a shortened season, and that every member of the teams will be pushed hard.

“If your car, engine, gearbox, aerodynamics don’t work straight away for the first Grand Prix, it’s very difficult to come back from there for sure,” he explained.

“The package has to be right, from the beginning. And if the team’s having any kind of issues, technical problems with the materials or the cars, it’s going to be a nightmare.

“It’s going to be a very busy season. For the racing drivers, it’s how to do the Grand Prix, how to recover quickly, do all the analysis and improve your personal performance and your team’s performance for the next event. I expect the number of mistakes to be higher, not only from the drivers, but also from the teams.

“The mechanics have had a huge break from having the confidence to change tyres quickly in three seconds. They’re practising all the time at the factory, but that’s a different story. It’s not the same as when the cars are running flat-out towards the mechanics and stopping in the exact place. So the mistakes will be there.

“The drivers have been having minimum chance to practise driving a Formula One car, so they have been doing go-karting and driving different kinds of rally cars and old racing cars to keep the muscles active and they’ve been using physical training programmes in a gym.

“But nothing matches the power of a Formula One car when it accelerates out of the corners to achieve forces where the body weight is five, six times higher than normal. So it will take a while for the drivers to get used to it again.”