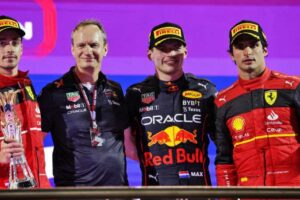 Mika Hakkinen sees the development race as being crucial to who comes out on top between Red Bull and Ferrari this season.

Those two teams have been the class of the field in the opening two races of 2022, vying for wins with Charles Leclerc and Max Verstappen claiming one apiece so far.

It has been tight too, with that duo battling fiercely but fairly on track and only half a second between them at the chequered flag in the Saudi Arabia Grand Prix which went the way of the reigning World Champion.

But it is Ferrari who have the advantage in the standings due to Red Bull’s late double retirement in Bahrain, Leclerc holding a lead of 12 points in the Drivers’ list while the Scuderia are 40 clear in the Constructors’.

There are no guarantees though, says Hakkinen, that the pattern will remain because the teams will be working hard between races to learn about their cars and upgrade them having been designed from scratch to conform to the sport’s much-changed regulations for 2022.

“To win by half a second after 300kms of racing shows just how close their battle is,” said the two-time former World Champion in his column for Unibet.

“After two races we can see there has been a power shift in Formula 1.

“It’s brilliant to see Ferrari and Red Bull so closely matched, so the question is now to see which of them can develop their car more quickly.

“The development race from Monday to Saturday will really determine who wins on the Sunday.”

The “power shift” to which the Finn referred means a move away from Mercedes and towards Ferrari, with Red Bull remaining in situ, at least in relation to the 2021 campaign.

Although Mercedes are second in the Constructors’ table due to Red Bull’s double Bahrain failure, they have been well off their rivals’ pace – and so the development factor very much applies to them also.

“Mercedes have a significant set of problems to fix if they are to catch up with Red Bull and Ferrari,” said Hakkinen.

“They need to do it quite quickly because the top two teams will be pushing so hard on their own development.

“It was very strange to see the Mercedes cars starting sixth and 16th in Saudi Arabia, with Lewis Hamilton clearly unhappy with the set-up of his car.”