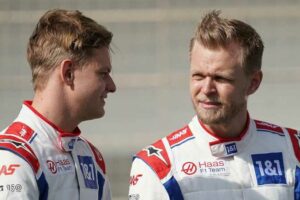 Mick Schumacher’s task to get the better of his new Haas team-mate Kevin Magnussen will only get more difficult.

That is the view of Colin Kolles, the ex-Force India managing director who thinks Schumacher needs “to work very hard to get to the level of Magnussen”.

In his two Formula 1 seasons, the son of Michael Schumacher has found two very different challenges facing him in order to assert himself as the top dog among the Haas drivers.

Although evidently a more talented prospect than Nikita Mazepin based on their Formula 2 achievements, the German knew his colleague carried significant influence due to his father Dmitry being the team’s main sponsor.

But with that duo now out of the equation, another test has emerged in the shape of Mazepin’s replacement, Kevin Magnussen, who has considerable Formula 1 experience – not least in four previous seasons with Haas from 2017-20.

And Magnussen has hit the ground running, scoring two points finishes in as many races so far this year in a VF-22 car much more competitive than its predecessor – whereas Schumacher has yet to get off the mark for either the season or his F1 career overall.

Finishing 11th in Bahrain, the 23-year-old could not take his place on the grid for the Saudi Arabian Grand Prix following a huge crash in qualifying which caused damage to the car that may potentially reach seven figures to put right.

Kolles, who was also team principal at Hispania as well as spending five years at the Silverstone-based squad through their guises as Jordan, Midland, Spyker and Force India, believes the pressure is starting to grow on Schumacher.

“He has to work very hard to get to the level of Kevin Magnussen,” said the 54-year-old, speaking as a pundit on German TV channel Sport1.

“He came back in without testing and after a year without driving in Formula 1 and was immediately better.

“Magnussen won’t get worse either, but rather better.”

Sitting alongside Kolles, former F1 driver Christian Danner thought Schumacher’s crash in Jeddah was down to trying to match Magnussen by reaching Q3 – which would have been the first time he had appeared in a top-10 shootout.

“It was really a shocking moment,” said Danner, who finished fourth in the 1989 United States Grand Prix in Phoenix from 26th on the grid.

“A result of the pressure his new team-mate is putting on him. The bar is much higher there.

“The great thing is he accepts the challenge.”