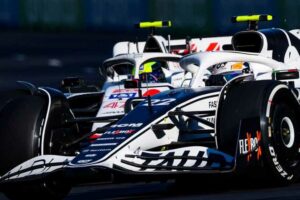 Going with a “holy cow that was close” when he swerved to avoid Yuki Tsunoda, Formula 1 will review the Safety Car protocols

Prepared for a start after a Safety Car period at the Australian Grand Prix, Schumacher had to swerve to the left to avoid running into the back of Tsunoda’s AlphaTauri.

The latter had suddenly braked, doing so in response to his team-mate, Pierre Gasly, hitting the brakes.

None of the drivers did anything wrong, it is just something drivers do before a restart as they try to get heat into their tyres.

For Schumacher it was an all-too-close encounter.

The Haas, Tsunoda and Gasly were all summoned to the stewards’ office after the race where it was decided that there would be no further action against any of the three.

The stewards did, however, note that drivers’ behaviour behind the Safety Car, especially as they all have to stay within ten car lengths of the car in front, needs to be reviewed.

They noted: “The stewards find no driver guilty of breaching the regulation, however, it is clear that the speed and braking capabilities of F1 cars, especially while trying to maintain required temperatures in tyres and brakes, are in tension with the ten car length separation behind the Safety Car traditionally specified in the regulations.

“This needs to be a point of emphasis in future driver briefings, to ensure the drivers collectively agree on how best to address this challenge before an unfortunate incident occurs.”

Schumacher finished the grand prix down in 13th place, the German unable to break his duck in Melbourne.

“It was a very eventful one,” he said of his Sunday afternoon.

“Right from the beginning with Carlos [Sainz] coming around and cutting back across the track, I think we got missed by a few meters there, and obviously Yuki under the Safety car coming quite close together.

“I think in terms of pace we were not too far off, it’s just unfortunate that there’s not a huge amount of passing opportunities here.

“Lots was learned, some positives, so we’ve just got to take it away with us and hopefully be better in Imola.”