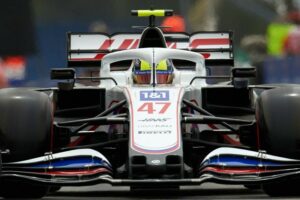 Mick Schumacher’s seat at Haas F1 Team may not be entirely safe. At least it’s not optimum.

Oh, the rookie’s place on the Formula 1 team is secure, but his seat has got to go.

Schumacher, 22, reveled on Thursday in Austria that his race seat simply doesn’t fit quite right inside his Haas car. A video posted to the Formula 1 website earlier this week featured Schumacher showing rival Sebastian Vettel something inside his car following last week’s F1 French Grand Prix. Turns out, Schumacher was just getting a second opinion about his seat from a four-time world champion.

“Basically, I’ve been sitting in a crooked position since the beginning of the season, just because the seat is central but I am not straight,” Schumacher said on Thursday in Austria ahead of this weekend’s Styrian Grand Prix at the Red Bull Ring. “We’ve actually been talking about it before. I took the opportunity to show it to him. We spoke about the seat, and I think he gave my mom a tip of maybe breaking it so I would get a new one sooner. It didn’t happen in the end, so I’ve got the same seat for now.”

Don’t blame the not-so-quick turnaround for a new seat on the Haas team, Vettel says.

“It would have been difficult within a week to get a new one,” Vettel said. “Don’t always follow the advice I give. I think the key, it’s very simple. I spent so many years racing and we spoke about the seat. There’s always small things you can improve or look at, so I wanted to have a look, and we had a look.”

Schumacher said that he’s gotten used to the not-to-perfect view of the racetrack from his perch inside the cockpit.

“It’s been crooked in the seat so it’s just about me trying to find the right position,” Schumacher said. “I think that obviously, not being symmetrical is something that I have to work on. It’s hard to achieve in a short amount of time, but the plans are there to change the seat in the near future.”

Seems surprising that seven races into the F1 season, Schumacher still doesn’t have a seat that fits properly.

“It’s not as bad as maybe some might think,” Schumacher said. “It’s a small offset. It’s something that I’ve been used to, and to be fair it doesn’t harm me in anyway when driving. So, it is something for us now that is a secondary concern. For us, it’s mostly about trying to get everything ready for the weekend and being prepared on that level and setting our focus on something else instead of wasting it something that is maybe not affecting me right now.

“As I’ve said, it’s something that is in plan and it will for for sure after the summer break come back with something that might be more centered. We’ve been working on it in the beginning of the season quite a lot. We got to something that is comfortable enough for me to keep going, so we left it with that.”

Meanwhile, Schumacher has looked to fellow countryman Vettel as a mentor this season.

“Obviously, he’s a huge help for me in all ways and anything on and off the track,” Schumacher said. “So, I’m happy that I can go back to somebody who that has so much experience and is so likeable. So happy he’s around.”

Added Vettel, “I’m always happy to offer help or advice. Sometimes the advice might not be the best, so don’t follow. But, I think small things like the seat, even if it’s not a big drama, these small things, all the experiences you’ve made in your time, I’m very happy to pass it along to help and share.

“If it’s just for the feeling that he’s not the only one suffering stuff with the seat or other things. Wherever I can help, I’m happy to help. He’s a great kid. I don’t think he needs too much advice and guidance what to do himself, but with small things, I’m happy to help.”