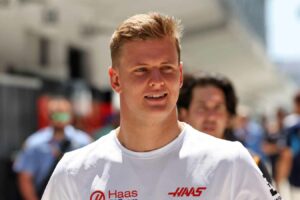 Haas’ Mick Schumacher is now at the top of Aston Martin’s list to replace Sebastian Vettel, according to a report.

Aston Martin has not enjoyed the best of starts to the 2022 season and new regulatory era, the Silverstone outfit currently P9 in the Constructors’ Championship with six points scored in as many rounds.

The team caused quite a stir at the Spanish Grand Prix when they unveiled the upgraded AMR22, one which quickly caught the eye of Red Bull, and allegedly the FIA before that, due to the similarities to the RB18.

Aston Martin have since been given the all-clear.

That upgrade failed to deliver the goods in Barcelona though, both Vettel and Lance Stroll missing out on the points.

There is also growing uncertainty surrounding the future of Vettel with the team, the four-time World Champion wanting to see signs of strong progress if he is to commit beyond this season.

And according to Motorsport.com, the growing belief is that Vettel will bid Aston Martin and Formula 1 farewell at the end of 2022.

It has already been reported that if Vettel does leave, then Aston Martin team owner Lawrence Stroll is keen on bringing in two-time World Champion Fernando Alonso, who is yet to sign a contract extension at Alpine beyond the current season.

But Motorsport.com claim that a new name has now entered the conversation, that being Schumacher.

The report states that Aston Martin is trying to improve its sales in Europe by focusing on the German market, so see having a driver from that nation, and with the surname of its most famous racing driver, as a strong piece of marketing in those efforts.

It is mentioned in the report that Aston Martin, unsurprisingly, has not moved to confirm that Schumacher is at the top of their list for 2023.

Of course, Schumacher’s deal with Haas is a little more complicated than most contracts, as it is actually a two-way one with him also serving as a member of the Ferrari Driver Academy.

Motorsport.com report though that Haas is the only team which Ferrari can offer Schumacher a seat at in Formula 1, which makes the situation less complicated.

In light of this report, it should be noted that Aston Martin do already have a second German driver in their ranks, that being Nico Hulkenberg, who replaced Vettel at the opening two rounds of 2022 due to Vettel testing positive for COVID-19.

Schumacher is yet to score a point this season, though after early struggles to reach the standard set by new team-mate Kevin Magnussen, he did look far more competitive at the most recent rounds in Miami and Spain.