Mick Schumacher has to be 'really cautious' of spare parts situation 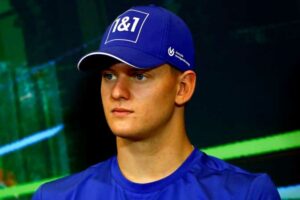 Mick Schumacher has said he must be “really cautious” at the Azerbaijan Grand Prix due to Haas’ lack of spare parts.

The German suffered another expensive crash last time out in Monaco when his car split into two and retired him from the race.

Whilst he himself was able to walk away relatively unscathed, it was another costly error for a team with one of the smallest budgets on the grid – although the financial damage to the team is not thought to be as bad as first feared from Monaco.

Going into the race in Baku this weekend, Schumacher has admitted the need for a clean weekend is on his mind.

“Well it’s important for me but also for for the team obviously we are kind of tight on spare parts and therefore have to be really cautious on that side,” he responded when asked how important a clean weekend was during the drivers’ Azerbaijan Grand Prix press conference.

“But nonetheless, you know, we’re still trying to perform and and get the points and that’s what we’re aiming for here.”

Schumacher commented that he was “surprised” that the car in Monaco split in two considering the impact was not all that harsh but he was also insistent there were some positives to take from the weekend.

“I think that the positives are we came through Monaco well through the FPs [free practices] and obviously we missed out on FP1 and then [we] kind of played catch-up until qualifying but then actually qualifying we were all quite close,” the 23-year-old said.

“We weren’t expecting to be as close to Valtteri [Bottas] and I think we were so that’s already a good positive. I think in the race we chose the right strategy like direction in terms of going from full wets to intermediates and then going to slicks quite early on we’re kind of forced to go to slicks due to the front wing missing.

“We have a lot of things which we can take away from there that are positives, but obviously the negatives are especially the ones we have to learn from.”

Schumacher remains point-less throughout his F1 career having managed an 11th-place finish in the first race of this season in Bahrain. Since then he has failed to finish any higher than 13th and will become the driver with the sixth-most amount of races without a point should he fail to finish within the top 10 in Baku.

His Haas team-mate Kevin Magnussen meanwhile is 10th in the Drivers’ standings, having picked up 15 points.